Although some rain blew through earlier in the day, by the meet time it was merely cool and damp, with high clouds and sun breaking through. In other words, perfect running weather! And we had company, thanks to the return of the Southern Tier SOAR team and a 15-person contingent from Woodbridge High School that make the 4-hour trek from New Jersey. It ended up being our largest meet of the year, with 74 runners completing at least one event and 165 individual efforts. Full results are now available. We didn’t have a professional photographer on hand this time, but I captured a few great shots of volunteers clowning around along with speedy runners against a picturesque sky. If you have any more to contribute, please upload them!

The meet kicked off on time with six heats of the 100m, with the first one focusing on “littles” like 2-year-old Guinevere Goldberg and Joel Kresock, plus 3-year-old Ava Hathaway. By the time we’d worked our way up to the final fast heat, Chris Ganley took the win for the men in 11.02 seconds, followed closely by Jacy Wilson in 11.14. The first woman was Liz Adebola of Woodbridge in 13.57, edging out her teammate Tatiana Camilo, who finished in 13.91.

Next up, in the 1600m race, Alexander Simpson ran away from the pack early on to take the win in 4:35, easily outpacing Woodbridge’s Joshua Manez in 5:07. On the women’s side, Melina Updale of Woodbridge ran an extremely strong 5:35 for the win, with Lansing’s Kathleen Sullivan second in 6:19. Also of note were Abigail Wagner of Southern Tier SOAR and Sophie Templier, age 11 and 10 respectively, who ran 6:24 and 6:24—impressive times for their ages. Kudos as well to 70-year-old Mike Homeyer, who dropped his 1600m time all summer, with a 7:40 in June, a 7:36 in July, and a 7:30 in August!

Back at the individual races, we tried a 200m this month and ended up with seven heats. Woodbridge took the first five places and swept for both men and women, with Omar Dieguez first in 24.44, slipping past Cornelius Jackson in 24.82. Liz Adebola (29.58) and Tatiana Camilo (30.08) repeated their places from the 100m.

Our final individual event of the evening was the 400m, where Woodbridge achieved another sweep, with Osei Akuamoah-Boateng placing first in 55.81, just ahead of teammate Anthony Bechtold in 56.67. Melina Updale took her second win of the day in 1:03.74, besting teammate Lila Ulmer in 1:11.95.

But the meet wasn’t over, with our traditional 4x200m relay to close things out. Unsurprisingly, the Woodbridge A team posted a smoking fast 1:43 for the win, followed by the Woodbridge B team in 1:55. Third was a combined Lansing and New Jersey team in 2:04, but the real competition came in fourth and fifth, where the Lansing XC Daughters showed the Lansing XC Dads their heels, outpacing them by over 7 seconds.

As always, the meet was made possible by the highly amiable and capable efforts of the dedicated track volunteer team. Carl Franck reprised his role from July as head timer, Tom Rishel once again served as starter, with Adam Pacheck recording bibs for the 1600m and managing relay handoffs along with Jamie Loehr and Steve Wagner. Matt Scheffler set up the PA system and provided the Lansing starting blocks for our sprinters. Bob Talda stepped into the clerk of course role and kept everyone lining up on time. Jesse Koenecke managed Meet Manager with help from Dave Kania, who also timed and performed other essential tasks that cropped up. Tonya Engst held down the bib pickup table, recruited for the relays, and and answered runner questions. Heather Cobb did backup timing and helped wrangle the lane timers, including Aaron Proujansky, Brittany Cronk, Damian Clemons, and Michelle Wood. Thanks to everyone—and anyone I missed!—and for those who might like to join us next year, note that many of us went up to Scoops for some post-meet ice cream and socializing. Just saying…

With luck, we’ll see everyone indoors in Barton Hall for our winter track series!

Hi Adam,
I was wondering if I could use this photo from last night on the social media pages for Scoops? Thanks for stopping by and supporting my business. 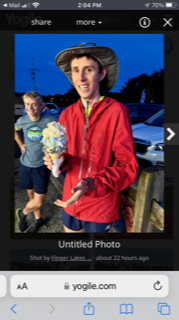 It’s OK with me, but let’s double-check with @apacheck and @DamianClemons, who are the guys in the picture.

I didn’t know you were the owner of Scoops! We’ve really liked having it there near the FLRC Challenge Lansing Center Trail course—@tonya and I stopped in twice on Saturday after our group run there.

It’s fine with me too. Finishing that cone is nearly as impressive as his running accomplishments.

That’s really nice to hear. I’m also the secretary for the Friends Lansing Center Trail, so we’ve been following the group runs through that as well. It’s nice to have such an interconnected community.

Thank you @adamengst and the track volunteer crew for letting my kids run their first races at each of the summer meets! They mostly enjoyed it and will hopefully want to come back for the indoor season when they turn 3!

Hi @LauraEverlastin, it’s also good with me if you use the picture