I will admit that I hadn’t previously considered running the number of years you’ve been married as an anniversary activity, but it seems like a great goal, even if it takes more than a day for some of us.

@amy-dawson @scottpdawson aaawww you guys are the sweetest! What a lovely idea!

I did this run this morning, enjoying the mild temperatures that the tree cover provided. There rim trails were nearly empty, and there were only a few people near the falls down below, so my pace was largely uninterrupted. This run felt great until I hit the stairs on the north side, just after the bridge. After grinding up the stairs, it was hard to get the legs moving again for the rest of the climb. Afterward I was hoping to go to Robert Treman State Park to swim and cool off, but the swimming was closed due to e.coli levels in the water.

Because my swimming cool down was derailed, I cooled down with some peanut butter cup ice cream from Cornell Dairy Bar closer to home, as well as another pint for later in the week. 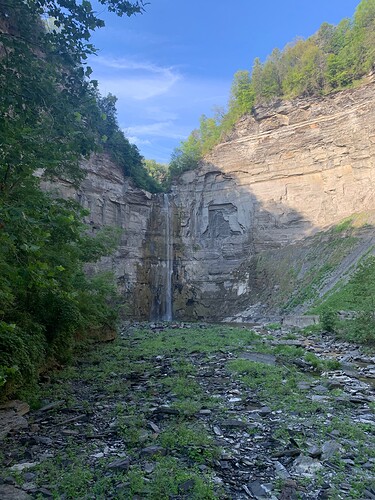 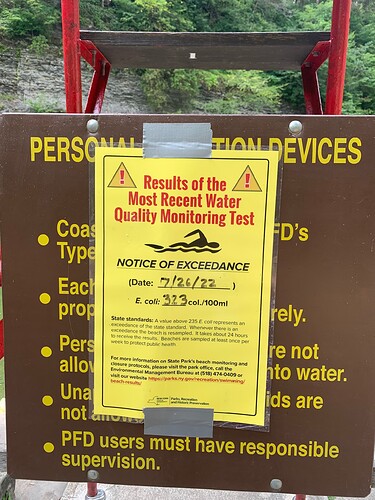 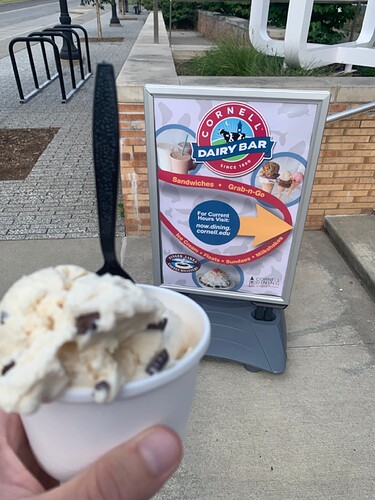 I’m late starting the Challenge this year, as I’ve been training for a few big races and focusing most of my runs on elevation gain. But in this part of this training cycle it’s time to add some bigger miles, so the plan is to use the FLRC Challenge to complement the current training load.

Of course, I had to start with one of my favorites: Taughannock Falls.

So last Wednesday, on 7/27, I spent a mid-day running the Challenge course there, and LOVED it. I’ve run the BDT, sections of the North and South Rim trails, and I’ve hiked the Gorge Trail. But this was my first time running both Rim trails and RUNNING to the falls along the gorge. The only thing I was sad about was it ending.

I wasted no time supporting a couple of local businesses! After completing my run at Taughannock Falls, I stopped in the gift shop to pick up an Ithaca is Gorges t-shirt for my husband (I already have one), and similar stickers for my daughters and myself. From there, I headed to Ian’s store to grab my FLRC purchases and pick up a few items there, including one more Patagonia Capilene Cool Lightweight shirt. For the intensely warm and humid days we’ve had, I live in these shirts now when I run. They are amazing at wicking away sweat and dry so fast after washing. I always manage to find useful items in Ian’s store and was happy to get one more of these shirts there, rather than somewhere else. 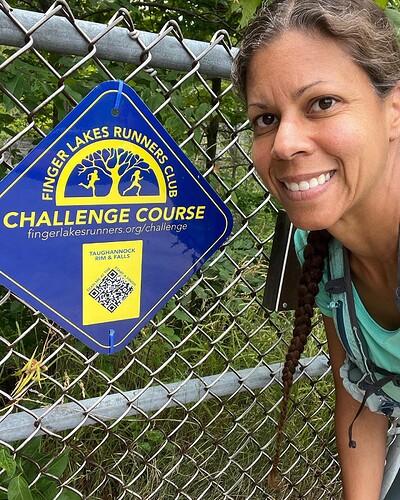 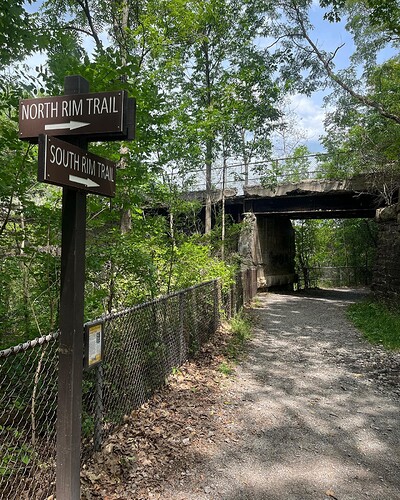 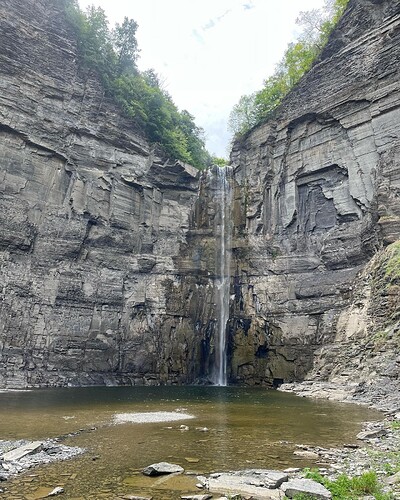 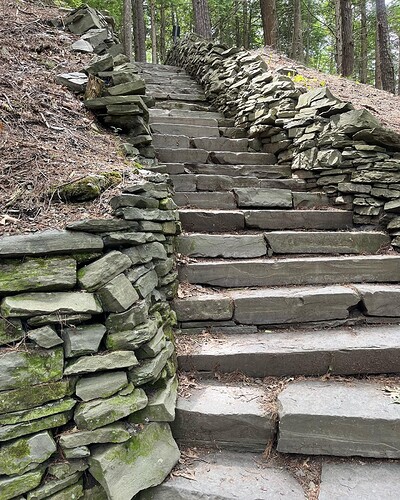 Make sure you get in a run or 5 on the Lickbrook & Treman Challenge course. It’s the same type of terrain and elevation change you’ll see during 90% of Twisted Branch.

I’m in the parking lot as we speak! Just finished the course and honestly, I loved it. It was great to revisit a few sections of the CT50 and also see some new-to-me sections. And I found so much of it to be runnable. Now I’m off to squeeze in one or two more Challenge courses and will post about all of them tomorrow. Thanks for the heads up!

My new mini challenge is to complete the courses enough times to receive an average score on all of them. Today was my third time running this course, and I really enjoyed most of it (the climb is brutal). It was warm and sticky this morning, so I was thankful that most of the course was shaded. I again started at the base, ran the gorge trail then headed up the North Rim where I hiked (more than I would have liked) on the steeper parts.

I came up with dramatic descriptions of what I was experiencing only to recognize that it wasn’t fair to people who truly is experienced to what I was comparing. So, I shifted my thoughts to gratitude that I was able to move my body through such a beautiful course.

I’ll have to keep a close eye on the average efforts on this course thanks to the Dawson Family (@scottpdawson and @amy-dawson @xander.k.dawson )!

Oh, and it’s been a busy week for my family. My kids are exhibiting their Brown Swiss dairy cows at the Chemung County Fair. I’ve had to sneak in early and late runs (for me) in order to help at their shows and manage the heifers that are still at home. I must brag on their accomplishments! 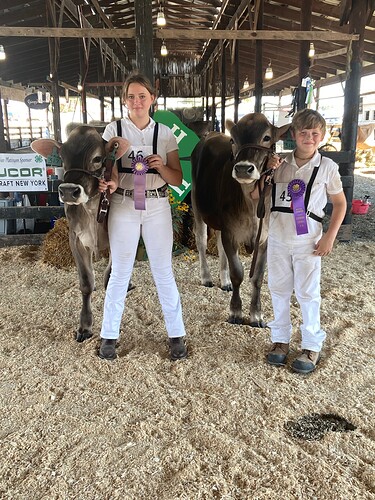 I love Gimme Coffee and can’t believe it’s taken me 3 runs before rewarding myself with a treat. 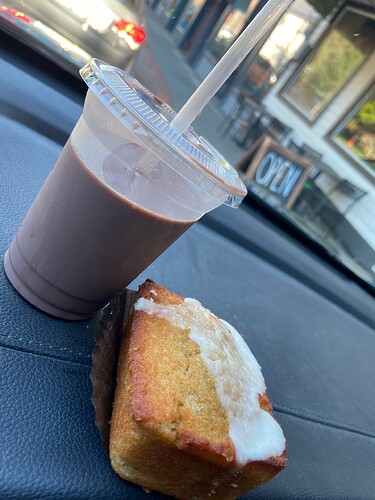 Their homemade chocolate syrup is amazing, so I had a chocolate milk and coconut lime bread which I highly recommend (if you are into those flavors, the coconut is subtle and the lime is a glaze). I also picked up a snickerdoodle blondie for my oldest kid.

Last night I invited @amy-dawson to run this course with me. Much to my surprise, she declined.

I parked in my usual spot at the start of the Gorge Trail. I ran the Gorge first then headed up the South Rim. I don’t know if it’s in my head, but I think I prefer the ascent up the South side over the North.

As I was finishing, I ran into a friend walking her dogs. I headed back up the Gorge to complete 5 miles then enjoyed a walk to the falls with my friend. It was a lovely treat!

I ordered breakfast from Ithaca Bakery and picked it up on my way to work.

I’m impressed that you did this before work - it was a hot morning!! I was most definitely not running this morning … just hobbling around on my blistered feet

Today was my last run of this course for the challenge. It will be my last run on this course for a bit - maybe a long bit. I don’t actually know yet. I ran this 76 times (enough to tie my kind husband @scottpdawson who was kind enough to let me catch him so we can legit share the sign). I thought I’d run it once. Interestingly enough, this course was kind of like trying a new food. Hated it. Disliked it a little less. Learned to appreciate it. Started to really like it. Scott has long loved this route, preferring to run it over the straight up rim trail. It wasn’t until toward the end of this challenge that I started to see this. It is actually easier than just running the rim trail because you get a flat portion that feels like recovery. If you allow yourself to look up every now and then on the base trail it is truly beautiful.
Today I ran the downhills and the flats with my friend Christina. She’s not part of the challenge, but she started doing this when I “had to get credit” so I needed to do more than my normal rim. I’ll miss this course for just a bit, but now that I have done it, I have a feeling it will be a new bar for me. It may be hard to go back to just doing the rim trail!

When I got home, Scott and I popped out to celebrate our tie with a latte at Gimme. We took our usual walk around the grid as we enjoyed our drink.

On our final weekend, I decided to revisit one of my lower point courses to see if I could knock a few minutes off my time. My IT band was flaring up after the downhill pounding of the last few miles of kick brook a couple weeks ago, but otherwise, it was great!

I started at the overlook but headed down the north rim first, then ran to the falls, then went up the south rim and around to finish. My thought was that last time, climbing up the north rim was so brutal at the end, I’d rather do the ascent closer to the middle of the course. This meant running down the north rim & stairs, which were so steep! Not sure which was better, but I think I preferred this direction.

The path to the falls was really crowded, which meant a lot of “on your left”s and weaving between dogs and leashes and families. I’ve never seen it so dry! 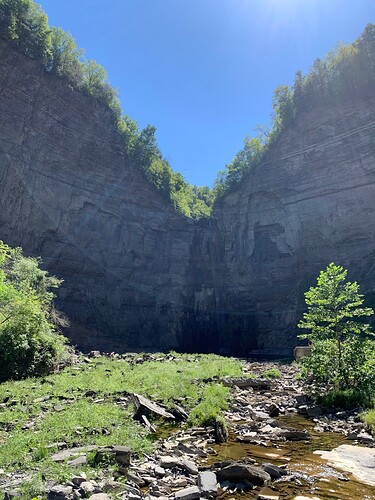 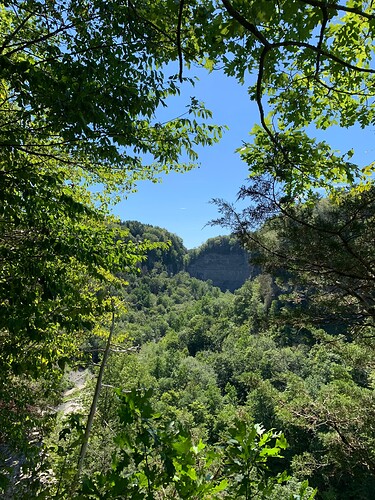 The most exciting bit was right as I came down the north rim trail to finish, there was a full wedding party milling about the overlook and path, so I had to sweatily burst through them to complete the course. 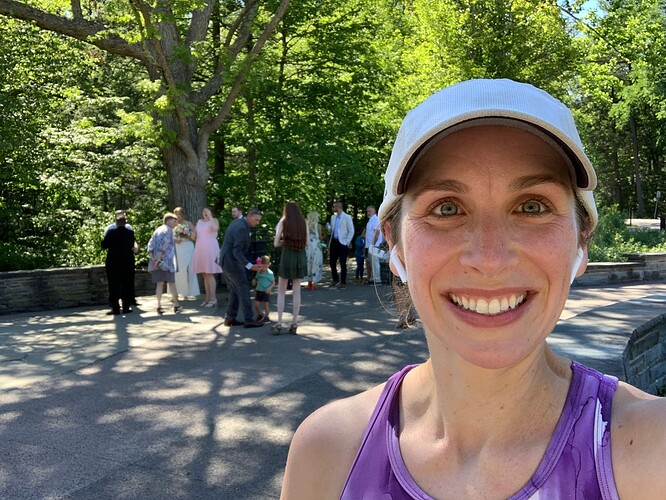 It was pretty hot by the end, so I drove out to Not My Dads and enjoyed a chocolate-vanilla twist dipped in peanut butter shell in a gluten free cone. That really hit the spot! 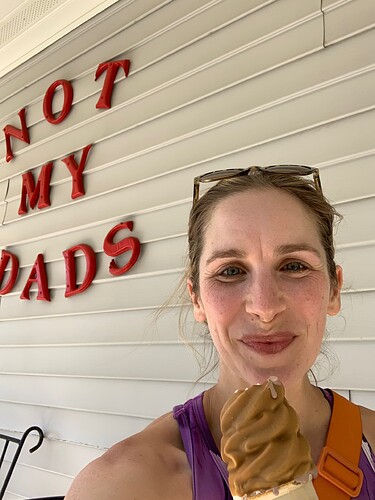 This was the last course I needed to complete the Challenge. I just got over a cold so I wasn’t feeling 100%, but when the trail started to flatten out a bit I settled into a quicker pace. Then I got to the north rim stairs and that was the end of that.

This being my last course, I celebrated with a Run Wild IPA on the grassy clearing next to the Welcome Center. (It was only 10 a.m. so I went with a non-alcoholic option.) 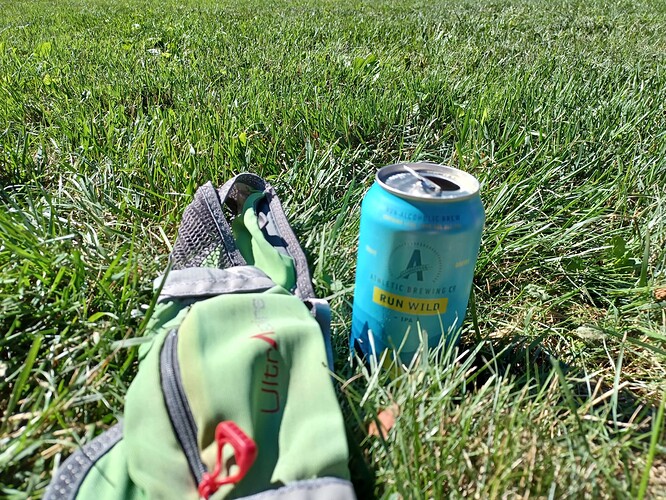 Later in the afternoon, my wife and I took our kids to pick sunflowers at the Finger Lakes Cider House. While we were there, we shared some cider and a cheese board.