You know those people who say a good way to motivate yourself is to sign up for a race? Well, I took their advice and signed up for the Can Lake 50 miler. Relentless forward progress has become my mantra. I read an article about Ed “The Jester” Ettinghausen and got all inspired. Here’s the link if you’re interested: 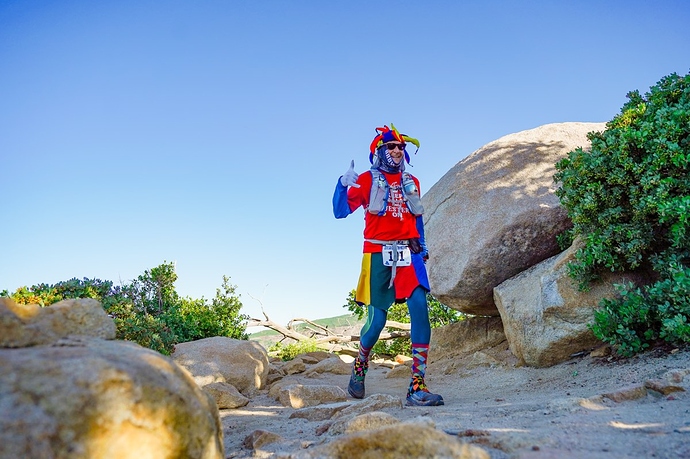 An interview with 58-year-old Ed Ettinghausen.

Fascinating guy—I love his hat, though I think it would drive me absolutely bonkers to have something bouncing around my peripheral vision.

I do think he discounts luck as a key motivating factor in his success. Anyone who runs that sort of mileage and races most weekends and doesn’t get injured is just plain lucky (or @shiggyrunner). Even if his lack of strength work and post-run stretching/rolling was somehow positive instead of negative, all it takes is one bad fall to damage tissue or bone such that you’ll be dealing with it for the rest of your life.

I was also struck by how much they kept asking him about age. Lots of us have set PRs—usually at longer distances—in our 40s, mostly due to smarter training, extra strength work to prevent muscle loss, and so on. That’s less common in our 50s, but it’s not unthinkable. And there’s certainly no reason to stop running and competing, even if the goals change somewhat.

I guess that I am like him. No stretching. No strength work. No rolling. But I do speed work. In the last 7 weeks I have run 5 5K’s between 24 & 25. My goal for this year is to get down to 23. As far as doing your first ultra at a timed event. I know many runners have done their first ultra at Mind The Ducks 12 HR in Webster. Without ever having run a marathon, before. They are like a running party. There is lots of food, tents, conversations and before you know it, you have gone 50K.

I am enjoying this discussion. Your comments and feedback are encouraging me. Really appreciate you sharing your knowledge and experience.

Ed’s been running and doing well at ultras for a number of years. He’s definitely an outlier in the injury-free category, but far from the only one. Years of base mileage consisting of slow and steady miles will make it take longer than you’d expect for a regression it fitness. Running huge mileage at low intensity has less of a negative impact on the body than moderate mileage at higher intensity, at least in the case of many ultrarunners age 50+. My bet is that if Ed tried to train for an run a fast-for-his-age marathon he’d get injured.

I’ll see you in Canandaigua on October 10.