COVID-19 has thrown a monkey wrench into our schedule of races and other events, so we have a new challenge for you in 2021: ten virtual races, half road, half trail, with distances ranging from 1 mile to the half marathon. How many will you complete?

Everyone who runs, walks, or hikes all ten courses at least once in 2021 will win the coveted FLRC Challenge medal. You’ll explore some of the area’s most scenic spots, with courses in City, Town, and State parks, plus in the Cornell Botanic Gardens and gorgeous state forests.

Want to increase the challenge? We have individual and team competitions for the speedy, the consistent, and the deliberate. Here’s the twist. You can run each course as many times as you want throughout the year to compete for over 200 cash prizes based on fastest times, best average times, and most efforts.

For a more social experience, recruit friends to your 10-year age group team, and compete against other generations for bragging rights based on age-graded times and most efforts.

We’ll provide a dynamic online leaderboard that you can check at any time to see how your recent efforts have affected your individual and team standings.

We’ve designed the FLRC Challenge to include people of all abilities, and we’ve partnered with the Ithaca Youth Bureau on a Kids Challenge. It will help parents encourage their kids to run the shorter courses in a low-key, fun way that’s age-appropriate.

Finally, all profits from the FLRC Challenge will support local running programs in the Finger Lakes, such as Girls on the Run and the GIAC Navigators.

Sound intriguing? We’re busy finalizing course permissions, coding the leaderboard, printing self-timing signs, designing swag, and generally getting our ducks in a row. Once we have everything set, we’ll open registration and at least several of the courses.

Watch this space for updates!

AMAZING!!! How big should our teams be? Also, mixed gender or not? Can’t wait to hear more!! Thank you so much for doing this.

Great questions, @lizhartman, and I’ll have documentation that will answer them all before we go live. But I’m happy to get into specifics here beforehand because one of the great joys of the FLRC Challenge has been thinking about how to make it as inclusive as possible and as much fun for as many people as possible. I’ve been working on the idea since the summer.

Before I explain teams, let me say that if you’re not into details, don’t worry. The FLRC Challenge leaderboard will calculate and present everything I’m going to describe. You don’t have to do anything other than submit your times when you run the courses.

To answer your questions upfront, you want your team to be as large as possible (so recruit shamelessly!) and teams are by definition mixed gender (the only distinction is age).

In a normal race or series, what happens with teams is that people recruit their friends. That’s great from a social standpoint if you’re driving around Seneca Lake together in Seneca 7, but from a competitive standpoint, it turns out that fast people know other fast people, so they put together a fast team, and then they beat everyone. All’s fair, as the saying goes, but it doesn’t make it as much fun for other teams. Plus, what if you don’t know anyone and don’t get asked to be on a team—that’s no fun either!

Teams in the FLRC Challenge are generated automatically at registration. Everyone who participates will be placed on an age group team (based on their age as of January 1st, 2021). Teams will be 1-19, 20-29, 30-39, 40-49, 50-59, 60-69, and 70+. (If we end up with too few in the first and last groups, we may move them.) Automatic team placement eliminates the problem of people not being included and of self-made teams being way too good for fun competition.

How do we ensure that the competition is fair, though? Surely the 20-29 team would be faster than the 60-69 team? To level the playing field, we use two metrics: age grading and most efforts.

What’s left is calculation. For age-grading, the leaderboard takes the fastest runs of the top 10 runners in each age group and averages their age-graded percentages. For most efforts, it just adds up the total number of runs team members have recorded.

Then we use cross-country scoring to assign points: 1 point for 1st, 2 for 2nd, and so on. If a team has the highest (fastest) age-grading it gets 1 point and if it has the third-highest number of efforts, it gets 3 points. Add those together for 4 points for that race. Do the same for every race and put it all together and you get the overall Challenge team standings, which will range from a low of 20 points and a high of 140 points. Lowest score wins.

It’s entirely possible that a team will decide that it’s not competitive for the overall Challenge, so it’s going to focus on a particular course or two and see if it can win those. Or a team might recruit a fast out-of-area runner to help lay down some fast age-grade times, even if they can’t run that many efforts.

There’s going to be a lot of game theory and strategy involved, and I can’t predict what individuals and teams will decide to do. But I’m dying to find out!

Love this! Can’t wait for the details…

Great idea Adam! Does this replace Stonehead/Pebblehead? We could run the various trail courses on our own (as many of us did with the Virtual Thom B last year).

Interesting question… I think the FLRC Challenge and the Trail Circuit are entirely separate. We can’t predict what will happen with the Trail Circuit in 2021, but if we can hold enough (whatever that means) of the Trail Circuit’s races, there’s no reason we wouldn’t give out the Stonehead/Pebblehead/Boulderhead awards, hopefully at the 2022 Annual Meeting.

That said, should conditions conspire to prevent enough of the in-person trail races from taking place, it wouldn’t make sense to me to try to do virtual versions of them on top of what the FLRC Challenge is already doing.

As a quick update, I’m getting ever closer to opening the FLRC Challenge. The leaderboard is live with test data (and it’s glorious!), we’ve finalized the logo (see below), and we’re close to getting the swag mockups. I have in hand the first draft course sign—a 12x12-inch aluminum diamond—that will be posted at the start/finish of every course, and I hope to order the rest of them today. Course selection is locked pending approval of permits and insurance, which couldn’t be submitted until the 1st of the year. And I’ve been busy writing explanatory Web pages and documenting the rules behind the leaderboard’s scoring. 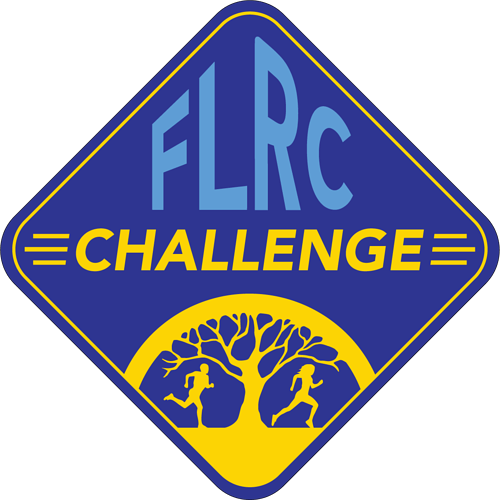 Great! I see the “half trail” in the original description, I would be surprised if Thom B were not one of them. It’s one of the easiest to get permission (Mike Ludgate can help if needed). Looking forward to it!

The Magic 8 Ball says “Outlook good” with regard to Thom B.

I am so excited about this!