Fast and fun times at the Finger Lakes 50s

The Finger Lakes 50s sold out across all three distances and featured the best race day weather we’ve seen in years, so it’s no surprise that this year saw two course records fall and had a higher than average finishing rate in the longer distances.

Photographer Jamie Love did a fantastic job capturing runners on the course. All photos are available in our Yogile library and are free to download and share. Full results with lap splits can be found here: 25K | 50K | 50M. If you have a race report on your personal blog (like FLRC Trail Circuit regular and 25K runner Kyle Reynolds), we encourage you to share it with us!

Jessica Chichester bettered her own women’s 25K course record while taking the win and finishing fourth overall in 2:11:28. She was 8 minutes ahead of the next woman, and more than 2 minutes faster than her previous CR from 2019. (Note that the Finger Lakes 50s course underwent a significant change in 2010. A separate set of records is kept from 1988 to 2009.) Cory Helder took the top men’s spot in 1:53:13. Like Chichester, Helder repeated his win from 2019, knocking a full 13 minutes off his previous winning time. All told, 71 runners took advantage of the dry trails and relatively mild temperature and humidity to finish the single 25K loop around the Finger Lakes National Forest.

Ian Ridgeway, of Holden, Massachussettes, ran away with the men’s 50K win, besting the field by a full 35 minutes in 4:28:34 and improving on his second-place finish from 2019. Women’s champ and fourth overall was Emma Raub from New York City, who improved on her women’s third place from 2019. Age wasn’t a factor in the 50K, as both Ridgeway and Raub were also the masters winners. The two-loop 50K saw 76 runners finish the distance.

The men’s 50-mile race was a barn burner, with the top two guys battling all morning and into mid-afternoon. After one loop, Brendan Connell of Black Hawk, Colorado, led Regan McCoy, of Lock Haven, Pennsylvania, by just over a minute. At the end of two loops, Connell extended his lead to 5 minutes. Both Connell and McCoy split the first 50K in times well under the 50K course record (Michael Heimes’s 4:19:20 in 2018), but both were intent on going the full distance. Over the third loop, McCoy narrowed Connell’s lead by 3 minutes, but it wasn’t quite enough. Connell crossed the line first in 6:33:50, with McCoy close behind in 6:37:32. The previous 50-mile men’s course record was Adolfo Munguia’s 6:50:25 in 2013.

Maura Tyrell of Buffalo led all women by nearly 30 minutes, finishing with the race’s eighth fastest women’s time ever in 8:39:57. The 50-mile race served as the National RRCA Ultra Championship race, and Tyrell and Connell were both crowned RRCA national champions. 41 ultrarunners went the distance to complete the 50-mile race.

That’s a wrap for 2022. We look forward to seeing you at the Finger Lakes National Forest again next summer! 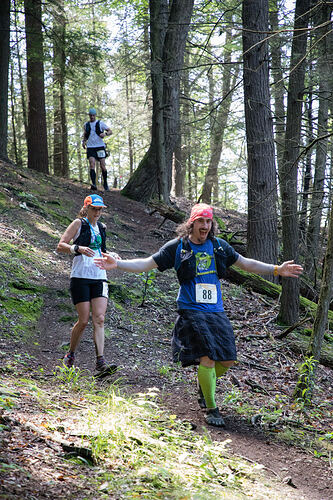 Great write up, Pete. I do have a question about the photos. The first photo with, I think Maura at a finish line representing a win at an RRCA race is not the Finger Lakes 50s race - a bit confusing as it has a different finishing time and other banners other than FLRCs. Do you know where the photo is from?
Steve

You’re right, Steve. I stole that from Mickie but didn’t pay close enough attention to the background. Good eye!