A few of us were just talking about gloves on Saturday morning. My favorite running gloves are the white cotton gloves that the PGXC series gave out one year. Unfortunately, that was long enough ago that the wrist elastic is gone and they’re getting some holes in the fingers. Something like these, which are apparently meant to be disposable, though I find that somewhat offensive given how many years they lasted for me. Maybe we should do a bulk order of these, although I think they’re one-size-fits-all, which works well with my men’s medium hands, but might not for others.

These gloves made with a 60/40 cotton/poly blend with screen printed log on the top of each glove. All gloves have an elastic knit wrist. They're the perfect way to express your passions and accomplishments and show them off to the world. Available...

I’ve tried to replace them a couple of times with fancy modern gloves, but none have worked nearly as well. That includes fleece gloves, nylon stretchy gloves, and fancy ones with wind-blocking. The problem in every case, I think, is that they’re meant to fit snugly, and as a result, there isn’t as good an air barrier next to my hands. I keep trying them and keep being somewhat disappointed.

I have Reynaud’s Syndrome, so I have trouble with my fingers until I warm up halfway through a run, and the cotton gloves were good down to about 20º. Once it got too much below that, I’d put a mitten shell on top of the cotton gloves and could go down to single digits pretty comfortably. I had a pair of GoreTex mittens from the 1980s running brand Moss Brown, and then I picked up another pair from Road Runner Sports a decade or so later, but they had both disintegrated from age and use. Happily, last year I was able to find another mitten shell at the Bushtakah outdoor store in Ottawa (our favorite place for winter gear because Canadians giggle at what we think of as cold weather). You can get them at Amazon too: 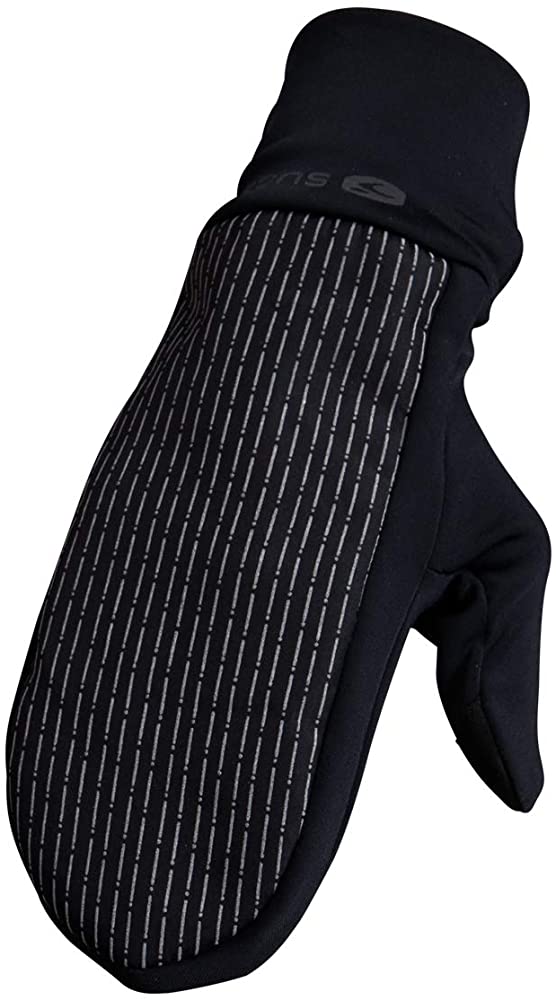 Anyone use fingerless gloves with mittens ends? Have had a few pairs but have a hard time finding ones that are durable.

Do you run hot or cold?

We should still have a stack of those cotton “throw-aways” at the shop. They’ve hung around in the back room for the past decade or so.

I agree with Adam, the cotton “throw-aways” are my favorite (I do tend to run hot though). Another advantage, which is a little gross but I know every runner has similar issues, is they are great for nose wiping! You try to wipe the snot from your nose with a fleece mitten and it smears everywhere. The cotton gloves are absorbent and stand up to multiple washings.

Several years ago, EMS had gloves made out of the same tech material you’d find in popular tech t-shirts. I tried a pair and they are great. I ended up buying several pairs. They dry fast and keep my hands pretty warm most of the winter, but on those really cold days, they can also be used as liners. I’m not sure if EMS will carry them this fall/winter – something to check out.

We should still have a stack of those cotton “throw-aways” at the shop. They’ve hung around in the back room for the past decade or so.

Cool! Next time I’m down, I’ll buy a couple of pair.

The cotton gloves are absorbent and stand up to multiple washings.

Oh, yeah, I forgot about that—the cotton ones are so much better for those of us whose noses aren’t cooperative while running.

Runners World had a big article on gloves last year, but many of the gloves they liked seem similar to those that haven’t worked worth a darn for me.

Keep your hands cozy in all conditions with these top performers.

Maybe I’m somewhat biased, but I’ve had all sorts of gloves over the years, and in the meat of winter, my hands would be frozen and frumpy in those cotton throw-aways. And all the gloves I’ve owned both handled snot and multiple multiple washings. Some lost stitches…though, I’ve actually worn a couple pair of gloves with lost stitching that customers returned until they full on missing side seems.

Liz, stop in when you get a chance. Warmest would be a Salomon glove that’s in which I pulled from their Nordic XC ski line. It would be too warm for most runners. Next would be a Manzella Tempest and they get a bit lighter from there. If a cold front comes in you can test them when you’re running through the night this Saturday.

“If a cold front comes in you can test them when you’re running through the night this Saturday.”

Who out there in the club and listserve world will sponsor Liz to run through the night this weekend to raise money for Tracy Mitrano in the home stretch? @adamengst wanna help spread the word?

Ian, I AM NOT RUNNING THROUGH THE NIGHT!

I do want to try to cover 40 miles over 2 days though!

I would love help getting the word out! I was actually in touch with Adam earlier today. I’ll share the details with you, Ian as soon as I have the links! Thank you for your help - you are the best!!