I am one of the few left who ran the predecessor to Skunk, i.e., the Boston Alternative (B.A.) Marathon, in April (?) 1982 (?) – my memory is a bit hazy. It shared the first part with the Skunk except we did a turn around loop on Stevenson very close to where the 10k turns around now, ran back to Dodge, then up Dodge. We did Thomas/NY79/Ellis Hollow, rejoined the current Skunk at Ellis Hollow Creek/Turkey Hill but then continued on Turkey Hill to NY366/NY13/Lower Creek/Hanshaw (past the SPCA) – 20 mile mark was at Freese Road. Then Hanshaw/Pleasant Grove/out past Flat Rocks to Varna, up the 366 hill, then rejoining the current Skunk at Game Farm and then in. I do remember my time: 3:01:25 on a pretty warm day for April. That Marathon was originally set up by Jim Hartshorne to be a last qualifier for Boston (!! two weeks later !!) but then morphed into a Boston Alterative). The year I ran it maybe 50 people maximum completed it? Someone must have the records.

I think @Rishel might be able to tell us more about that race, since I remember him sharing stories about it at the club’s 50th-anniversary meeting.

But to extend this topic a bit, one of my favorite races of all time was the Elbridge Alpine Classic, which was a roughly 7.5-mile trail race, up near Syracuse. It had a wide stream crossing and some seriously steep hills (with ropes!)—it was one of the few times I’ve blackened a toenail because of jamming it into the front of my sneakers. I even remember which sneakers I was wearing—black and gray Saucony Magic, with those fabulous Saucony triangular lugs. Anyone remember this race? I think @shiggyrunner said, surprisingly, that he hadn’t run it.

I ran it with my father after my junior year of high school in 1984, and in 1985, I ran it again with my high school cross county teammate Ian Saunders, who was two years younger than I was. I can’t remember anything about times or places from either race, but Ian, who is now Bill Gates’s creative director, recently embarked on a wonderful project to recreate elderly race T-shirts that were disintegrating. I have my original Elbridge Alpine Classic shirts in a box in the attic, waiting to come down and serve as sunscreen for summer running since they’re not thick enough for anything else anymore, but Ian laboriously scanned, retouched, and then printed—with a color match on the shirt—the Elbridge Alpine Classic shirt as a Christmas present for me this year. 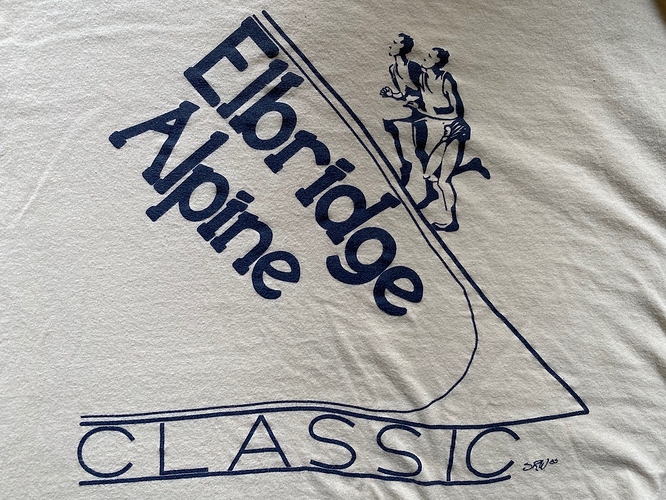 When I moved back to Ithaca in 2001, I checked to see if the race was still going on, but it had stopped years before, as I discovered in this newspaper article.

What’s really freaky is that a Web search revealed some old press photos that can be purchased on eBay. And I found them via a UK Web site. The guy crossing the finish line is apparently Mark Donnelly of Syracuse, whose name seems familiar, and the person in front holding the rope for the stream crossing looks a lot like @ydeboer. 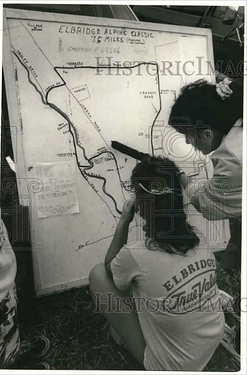 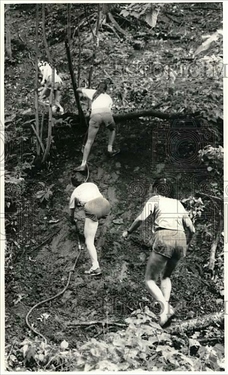 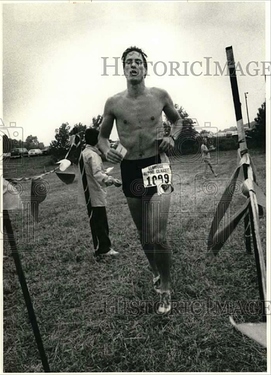 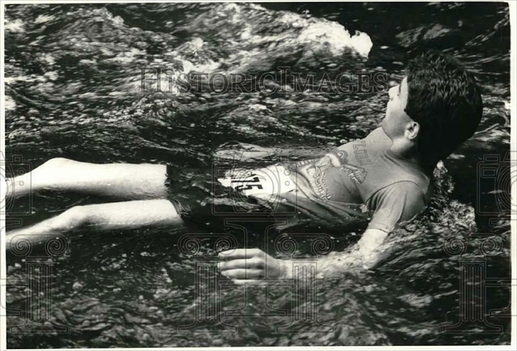