Congrats to everyone who ran the Finger Lakes 50s on Saturday in some serious rain, fog, and mud! Special thanks to race directors @tpdady and @me.runalot, and to the many volunteers who made it all happen.

@Ian put together this fabulous video for his Trail Collective site. 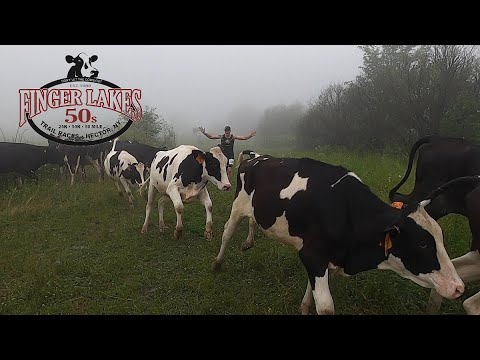 Any race reports or particularly impressive mud photos? Let us know how it went!

X-posted from HNAC email, so forgive the duplication.

In a surprise to no one, the course was extremely muddy and rainy. There were heavy amounts of standing water through many sections of the course. The on/off rain helped turn the mud into actively flowing streams. The mud in the cow pasture area coming from the final aid station was impressive. Inches of standing mud, that made your shoes weigh 5x as much. Luckily 400m uphill the course was a streambed again, and the mud got washed away. The volunteers were happy, and for the most part so were the participants.

Nice write-up Mike! Great job on not bailing when things bottomed out. Run enough ultras and the bonus mileage is bound to happen; at least you got that experience over with now so it’s less likely to happen next time.

Did anyone encounter poison ivy on the course? It takes 48-72 hours to set in and I’ve been itching like crazy since Monday night on my legs and upper arms.

Improbably rubbed on some near the downed trees at Stewart Park two weeks ago, but the itching wasn’t too bad until last night.

so I ran the final 8 miles with a football without getting a touchdown. This probably makes me an honorary member of the Buffalo Bills.

It only took three months, but here’s a short write-up I did about my morning at the FL50s 25k. The Long and Winding Trail: Just the "Fun Run" at FL50s

I finally found a few minutes to read your writeup, @Petorius—nice work, and it sounds like you had a good time. Dan Timmerman is seriously fast—he was one of the three guys who broke the overall course record at Danby this year too. I was a little bummed to read that he’d taken my masters course record, but considering that he ran over 14 minutes faster than I did in 2017, I can’t complain even if that year was even wetter. And Donna has been tearing up the trails this summer and crushing me in the PGXC races—at least in the last one, she had to pass me at some point in the race.