After losing last season to the pandemic, the Pete Glavin Cross Country Series came back as strong as ever with 240 runners from 8 clubs around upstate New York in the first race of the season. The highlight of the race was a pair of wins from the FLRC women, but there were a ton of good races and everyone had a great time. And it’s not too late to sign up for upcoming races!

@pgxc-women and @pgxc-men, if one of your family members took pictures at the race, please ask them to add them to our shared album. No account is necessary and it’s easy to upload from a phone or computer. 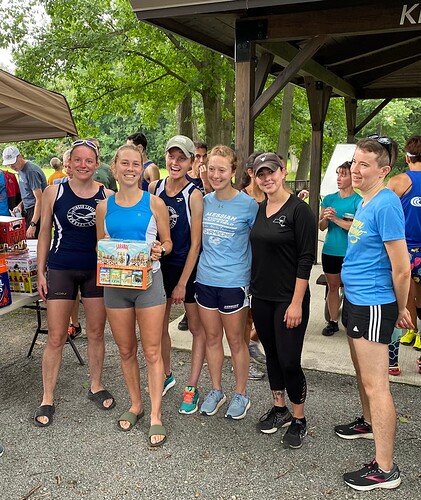 Despite losing one of their top runners mid-race to a turned ankle (after a recent surgery), the FLRC Open team of Kathleen Kanaley, Jenny Berkowitz, Sarah Codd, Amanda Lockett, Sarah Ridenour, Louise Debefve, and Amalia Skilton snuck past a strong Syracuse Track Club team with a home course advantage by a single point. And look at those finishes—Kathleen Kanaley and Jenny Berkowitz took 1-2, Syracuse took 3-4-5, and Sarah Codd took 6th, leaving FLRC in the lead by 3 points. But then STC’s fourth and fifth runners combined for 28 points, leaving it to FLRC’s Amanda Locket and Sarah Ridenour to bring home the win by keeping their combined score down to 30 points. 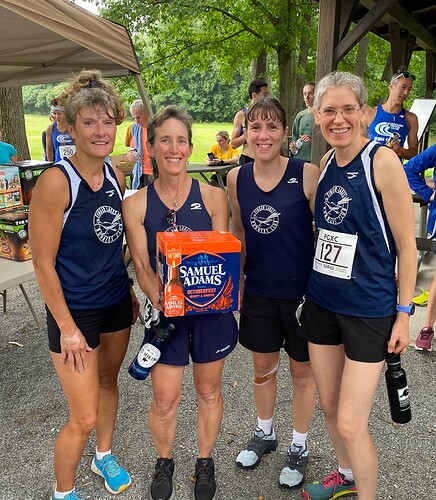 FLRC’s second win for the day came from the Vets team of Caitlin Loehr, Brenda Osovski, Sandy Gregorich, and Kim Jackson. Despite not placing anyone in the top three, the team’s tight 4-5-6 scoring gave them 15 points, ahead of (Buffalo) Checkers AC’s 20 points and STC’s 21 points.

Although there were no other team wins for the day, we fielded a team in most of the age groups.

In the PGXC series, the top three runners in each age group win chocolate (teams win beer), and we took home a few boxes. Full individual results are online at Leone Timing too. 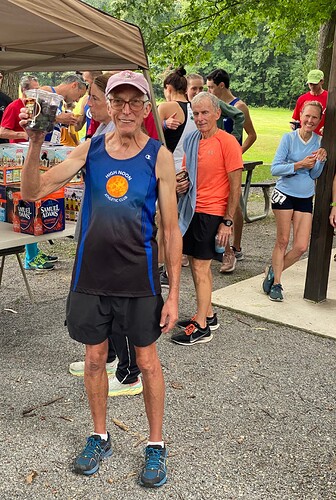 Here’s an inexcusably long step by step account on my first PGXC race in 10 years! It was great to be back.

PREFACE/BACKGROUND (OPTIONAL READING): Yesterday was a big day for me, doing my first actual non-virtual non-triennial race since June 2019. I was going to race 10 miles in New Hampshire on 8/24/19 but it was 8/23 that I fell on a trail and ruptured my quad tendon. I had surgery twelve days later. Friends who had this injury previously told me that it would take about two years until it felt sort of normal. It’s a simple operation with a near 100% success rate, but there’s nothing arthroscopic about it so there’s a lot of scarring and tissue damage to work through to recovery. I have done a few virtual 5Ks through Covid, and was starting to do some promising workouts. Unfortunately just as races were starting up again, I had another health issue come up; one I don’t want to detail publicly but one that required some fairly serious treatment. Prognosis for full recovery is excellent, and while side effects of my treatments were not debilitating, they did not lend themselves to having a ton of energy. Now I’m all through treatments and should be regaining full strength over the next few months.
Thus it was a thrill to be at Pete Glavin series season opener for my first race in 27 months. I visit Central NY often, but it had been several years since I was able to line up a visit with a chance to run with the HN/FLRC team. And I think last time I did one of the XC races, it was at Green Lakes State Park near Syracuse, the day after I’d done a long leg at triennial in 2011 and finished dead last in M50-59 age group. (Hang on, checking race archive … yep; that was it.)

TRIPLE XC WEEKEND: Friday I helped prepare the course and help out at Wellesley High’s season opening race at home against Brookline and Walpole. Son Tommy was 27th of 72 in the 2.1 mile JV race; a good showing for him. Saturday was son Eddie’s college debut for Hamilton College in their home invitational. He did great, finishing 48th of 106; 11th of 19 for Hamilton; second first year (and by just a couple of seconds). Hamilton won the meet easily over five other schools, including Ithaca College.

Then Sunday was my race. Ann and I drove from Utica to Liverpool and it was fun to see a lot of people I knew, including the other Rick Cleary, longtime presence with the Syracuse Track Club. He wasn’t running. He encouraged me to rely on “muscle memory” to run fast. I did rely on muscle memory to remember how to pin on my numbers … well, Ann helped … and got in a mile warmup before race time. It was such a great feeling to be in a huddle and see so many people around, I got quite excited.

So excited, in fact, that I ran the first mile in 8:34. Given my current level of fitness, that was a little fast. I had told the family that I thought 28:30 would be a good effort, more like 9:10 pace. At the first big uphill I paid the price. Other Rick was standing at the top and asked, “How’s that muscle memory working out for you?” I said, “Oooooog.” Or something like that.

The second mile was pleasant. The nice thing about being near the back of the pack is that there aren’t that many people to pass you, even when you slow down! I slogged the other miles feeling like I was making good progress, even though the people in front of me looked like they were going soooo slowly … and getting away from me at the same time. I threw in a couple of 9:45s and nothing hurt. I was happy enough to cross the line in 28:38 … very near goal pace, though my watch said the course was only 3.03, not quite 5K. Anybody else have that? I was 200th place out of 240 runners; and 23rd of 28 in M60-69. Hey, not age group last this time!

I did a nice cool down with old pal Sandy, got into dry clothes and sucked it up for the five hour ride home to Wellesley. I didn’t have time to stay for the results, but it appeared FLRC had done very well on the women’s side; and our men’s teams had some success as well. Adam told me that since we had five “super vets” he had moved me down to “vet” so that our 50-59 group would have five runners and be able to score. This made me feel useful and important; and also made sure that I finished even when I got tired. This is something of a family tradition, as in the 2001 race at the same venue my son Joe, then 15, jumped in and jogged 5K on a wicked hot day so that HNAC would have a full open team! See http://www.gvh.net/results/2001_09_08longbranchpark.htm He had come along with me as I told him we’d play golf afterwards. It’s the only time we ever got a cart.

Thanks to all for making me feel welcome I hope to make another race or two this season!

From a personal standpoint, this race was a qualified success. Recurring left calf strains have been competing with a high hamstring tendinopathy since I raced a 1500m in a track meet in late June. (Probably shouldn’t have done that on the minimal training I’d had—short races are no longer for free at my age.)

So I signed up for the race knowing that I was entering as a warm body. I’d been able to run between 2 and 6 miles slowly over the past few weeks, so I figured I’d jog the 5K and hopefully help the Vets team get a team point in the Club Cup competition.

I lined up well back from the line and, as @Brenda_Kirk can attest, spent the first quarter mile telling myself out loud to take it easy. Even though I’ve had no training, I was staying well within my aerobic capacity, so it was sort of fun to run easy and be able to pass people whenever I felt like it. The calf didn’t twinge at all, and while I could feel the hamstring/glute, it was just normally tight, rather than painfully so. Nevertheless, I went up the loop’s one hill really slowly since that’s how I blew out the calf last time. But downhills don’t bother me so I picked up all my lost places again on the other side.

At about 2 miles, I passed @eg447 walking—she’d rolled her foot, and since this was post-surgery, she was walking it in. Had she finished, the Open women’s team would have crushed STC. Then I caught up with @jeanluc and @Banyan_Tree and @columbia-warren and @Tristan_Lambert and ran with them for the rest of the race. Since I didn’t think my time would be anything to write home about, I devoted some energy to coaching, encouraging them up the second hill. Then, as we closed in on the final field, I told Banyan (who’s 15 and has barely raced before) to pick it up with me and then sprint all out once we turned into the straightaway. He’s still learning, and when he said he’d try, I quoted Yoda and told him there is no try, only do. We hit the corner of the last straightaway and he took off properly, beating me by 2 seconds. Tristan was 2 seconds ahead of Banyan, and Columbia and Jean-Luc were 3 seconds back from me. All in all, a nice pack.

I was surprised that I finished fifth overall for Vets in 20:30—even in great shape, I can’t stay with Mike Nier, who ran 19:00. But I can usually come close to Joe Mora, who ran 19:30. But after the fourth Vet came through in 19:36, it was empty until my 20:30. That works out to a 6:44 pace, faster than I had anticipated running but slow enough that it didn’t make my injuries worse. (Phew!)

The teams worked out well. Open and Super Vets were never a problem, but as of the morning of the race, Masters and Vets had only four people each, with five needed to score. Kevin Nelson came unexpectedly, giving the Vets five, so I moved Jean-Luc down to Masters to complete that team, and then brought Rick Cleary down from Super Vets to Vets to fill out that team.

With the benefit of hindsight (he says, as he pores over the team numbers), I should have run Rick down to Masters and kept Jean-Luc on Vets, since we would have traded Rick’s 20 points for Jean-Luc’s 4 points, which would have put us ahead of Checkers in 3rd rather than 4th and snagged us another Club Cup point. Although I’d hoped the Masters team would compete for second, they were 4 points off in third, and there were only three teams. Even if I’d run down to Masters (one place ahead of where Jean-Luc finished for the team), there was no changing that third place.