This argument in this video would suggest so, but it seems to me that the mile isn’t nearly as commonplace as the marathon these days, and I’d guess there’s less money in it as well, both of which will reduce the number of insanely talented runners who focus on it.

I’ve watched this video before, mostly because it is often forced upon me by my YouTube recommendations as a result of watching El G’s other races

El G is my all-time favorite and the first runner I ever read about in a tiny newspaper column in 4th grade, so I hope that his record stands forever.

That said, I don’t think there is any solid proof or evidence in the video as to why or why won’t there be a sub-3:40 mile. There are a lot of observations related to running in general or other events such as progression of marathon times, the technology changes over the years in terms of shoes and track surfaces, as well as VO2 max observed in athletes at the highest level. The 20-sec per mile differential is also a more anecdotal observation than a number based in specific analysis. I would love to see an analysis for the mile like the one in Modeling: optimal marathon performance on the basis of physiological factors. which puts the marathon limit at 1:57:58 to be swung one way or another.

As for the popularity of the mile, just last year Samuel Tefera broke the indoor WR in the 1500 in Birmingham and Yomif Kejelcha (his unfortunate rabbit for the 1500 m) broke the indoor WR in the mile at BU. With the likes of Elijah Manangoi, Tim Cheruiyot and the Ingebrigsten brothers all being very good milers, there is a very good chance the mile and 1500m records will drop further and El G will have none to his name some point soon

Ved, thanks for the link to the BU race. He did the entire last 1/2 mile on his own. It reminds me of when I saw Gebreselassie run 26:22 for the 10K in Hengelo some years ago, when I lived in the next town. The rabbits (excellent Kenyan and Ethiopian runners) could only keep up with him for the first 4k! He went through 5K in 13:14 or so and then kept accelerating. As to the 3:40 mile, never say never. Somewhere in the world a Ussain Bolt-like middle distance talent will be born.

That BU race is astonishing, and I think I actually preferred the amateur stationary camera—you could really see how fast they were moving and see where Kejelcha was in comparison with the rest of the field. He looked incredibly strong the entire way.

A tip for anyone posting links to videos: if you put the URL on a line by itself, separated by a blank line above and below, Discourse will embed the video right in the post, like mine at the top.

I have to think no records are safe at this point. Even if physiology isn’t particularly improving that much (every now and then we’ll get a genetic freak, but few and far between), the role of technological advances has been increasingly… apparent. The Vaporfly-style technology is already being integrated into track spikes, so within the next few years we’ll see some optimization of it.

Reminds me of what happened with the brush spike for sprinters in 1968. 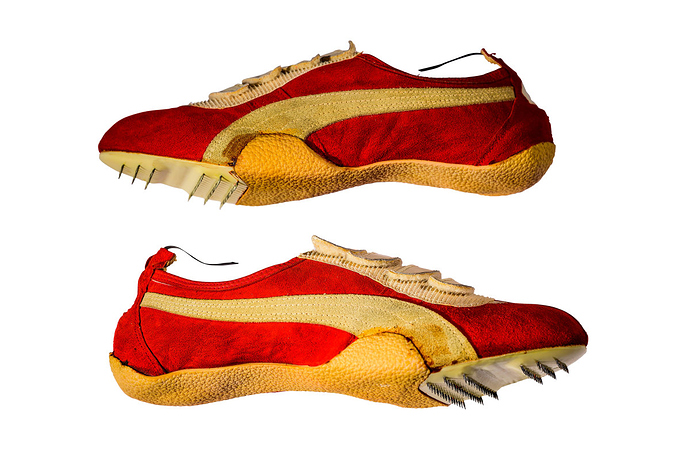 The Puma shoe that upended the 1968 Olympics

It threatened the track and field record books—and Adidas’s place atop the footwear hierarchy. What happened next was part Cain and Abel, part cloak-and-dagger.