Since 2017, Citius Mag has been getting the word out about the Blue Jeans Mile which is as simple as it sounds - run a mile in blue jeans. You would think that the World Record for such a cumbersome and chafing-filled adventure would be somewhat slow but the men’s mark stood at 4:11 run by Dillon Maggard of Utah State until recently. This past week, Johnny Gregorek of ASICS (former Columbia athlete) who is second on the all-time American indoor miler list at 3:49.98 decided to run a fast blue jeans mile targeting the WR, to raise awareness for the National Alliance of Mental Illness (NAMI). in memory of his brother Patrick.

The video is here if you want to watch it - Johnny ran 4:06 and raised in excess of 30,000 dollars beating his initial goal of 2,500 by an order of magnitude! The live-feed of the video on Instagram hosted by Johnny’s teammate and dear friend Kyle Merber was pretty awesome - many pro athletes tuned in to watch him run it including Nick Willis, Molly Huddle, Kara Goucher, Noah Droddy.

Here is the Runners World article on his amazing mile.

OK, this is both impressive and hilarious. I’d only tangentially heard about the Blue Jeans Mile, and I love the fact that it’s basically a gag. 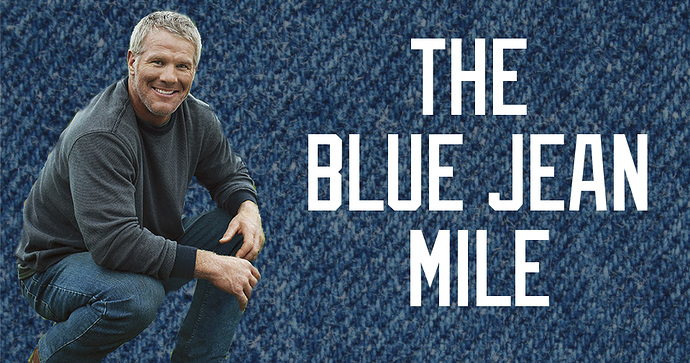 For far too long, track has waded around in the kiddie pool of obscurity. What if we're already wearing the answer to bringing it to mainstream audiences?

But clearly, a gag with legs, given the credentials of some of the runners competing. Though I don’t know what I think about the change in rules from 100% cotton to no less than 72% cotton.

Amid the advancement of jeans technology, CITIUS MAG has set new rules on cotton and denim percentage for blue jeans mile competition.

Once we’re back to regular meets, we’ll have to host a local Blue Jeans Mile.

I did one myself the morning before Gregorek ran his! The tracks in Ithaca are all still closed to I went to the Groton High School track and did it there. Since I’d just gotten Saucony’s new carbon-plated shoe, the Endorphin Pro, I debuted those as well. Sufficient to say it was a lot of fun. I was very sceptical of it feeling very difficult and potentially chafing a lot but I actually think it was just fine. I negative split with a 75 second last lap and ran a 5:20 which I was really happy with considering that Nick Symmonds ran a 5:13. 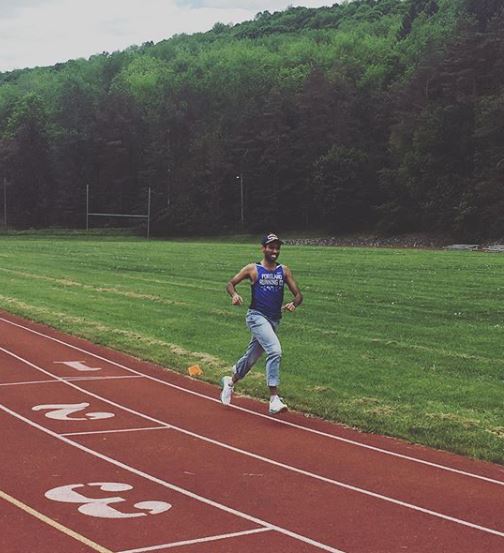 I’ve never tried to race in jeans at any distance, but once, in the early 1990s, Tonya and I were out on the Dungeness Sand Spit on the Olympic Peninsula with her family and it was an absolutely gorgeous cool day. We’d spent some days together already, and it was a long drive there from Issaquah (the other side of Seattle), so on a whim, I decided to run by myself to the end of the sand spit and back. I knew that it was 5 miles, so I was aware that I was signing myself up for a 10-mile run, in jeans, but I didn’t quite anticipate that the Dungeness Sand Spit would be made out of, you guessed it, sand. On the way out, that wasn’t much of a problem because I could run on the hard-packed sand near the water.

But after I’d made it out to the lighthouse at the end, admired the view, and headed back, I hit another unanticipated problem: the tide coming in. It turns out that the Dungeness Sand Spit gets really pretty narrow at high tide, and the land that remains to run on is looser sand. I also didn’t know for sure that the high tide wouldn’t cover the ground entirely in spots, which added a bit of stress—this was well before we had cell phones. It was a slog, and starting to get a little dark by the time I made it back. But it was such a glorious run—even in jeans—that I didn’t mind. (And I didn’t get in too much trouble for disappearing for 90 minutes.)

What’s the record for the Uphill Bluejeans Beer Mile? No such thing? We should add it as a club race, going up Remington Road!

Maybe we should connect with the Finger Lakes Cycling Club for the Cascadilla Blue Jeans Kilometer Climb.