The poster attached was part of an exhibit of posters at the Portland Art Museum. The exhibit was of posters displayed in bookstores during the 1890’s to announce the arrival of new issues of magazines or of new books. Such posters were used only for a few years and disappeared by 1900 for two reasons: 1) the posters developed their own market and their sales were detracting from the sale of the publications, and 2) books started coming with colorful dust jackets and magazines with illustrated covers. This particular poster and the book it advertises should be relevant to the running interests of FLRC members.

The book “Cinder-Path Tales” is a collection of short stories written by William Lindsey dealing with running and other sports. The book is available on-line through a link found by Adam Engst:

Published in 1896, these stories were written long before the current interest in running and exercise, but at a time when current competition was just beginning. That is the same year as the first Modern Olympic competition (64 athletes from 10 countries). The book is dedicated to John Graham the Athletic Manager of the Boston Athletic Association (and manager of the first US Olympic team). The first Boston Marathon was held the following year, 1897, with 15 male competitors running 24.5 miles. The first Boston Marathon was inspired by the previous year’s Olympic competition. 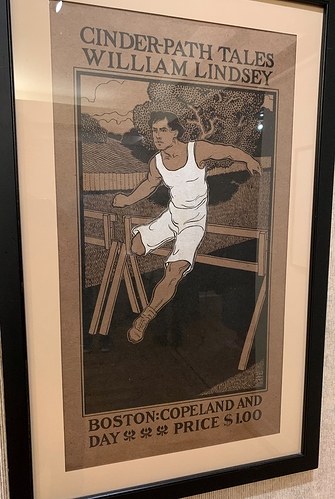 Such a cool find, David, thanks! And when I mentioned it to my mother, who used to be Cornell University Archivist, she told me about Athlos, a Web site dedicated to athletics literature. And it includes a link to Cinder-Path Tales.