Thanks for making the 2022 Skunk Cabbage Classic a success!

We all know Skunk is special—it’s not just another race. It’s when we poke our collective heads out of winter hibernation, grumble about the weather, and get out there to run, volunteer, and hang out with friends we don’t see as often as we’d like. Sure, Skunk is a race (and results are up), but it’s equally an excuse for the local running community to reconnect. A number of people made a point of telling me how much they appreciated Skunk coming back after our two-year pandemic hiatus.

So from that perspective, FLRC would like to thank everyone who made Skunk possible this year:

Here’s looking forward to Skunk in 2023! Now go sign up for the FLRC Challenge, which starts April 16th.

PS: If you have any great photos of you and your friends from Skunk, please upload them to our shared photo album, soon to be populated with professional photos as well. And feel free to post any funny Skunk stories or race reports here too!

And then there was beer at mile 8!

I had asked Heather at the finish line about helping take down things but then I had to bail, so I apologize. Thanks to everyone who volunteered today. This was my first Skunk and it was a great experience!

And then there was beer at mile 8!

No worries about needing to bail—there will be plenty of other opportunities to hang out with the cool kids while volunteering.

It was so great to see you and catch up a little after your finish!

It was great to see you too! And awesome to have you place the finishers medal around my neck after I had to walk off that finish and almost forgot!

It’ll be great to catch up more with you in the future.

I look forward to hanging with the cool kids.

Thanks again to all of you for pulling this together.

This being my first skunk, I was really impressed with how well organized and supported this was. The volunteers were awesome and did a great job of managing the traffic and the runners. It was also nice to finally run some of the course without the need of a headlamp. It was a good time and it was great that the rain let up until most everyone was finished or close to it.

Word has it that they received hilarious comments from a number of the runners. One female runner reportedly exclaimed, “I’ve been waiting 3 years for this!” and enthusiastically grabbed two beers!

We love that kind of enthusiasm!
Thank you to all the Skunk ppl in charge. It’s always a great race! 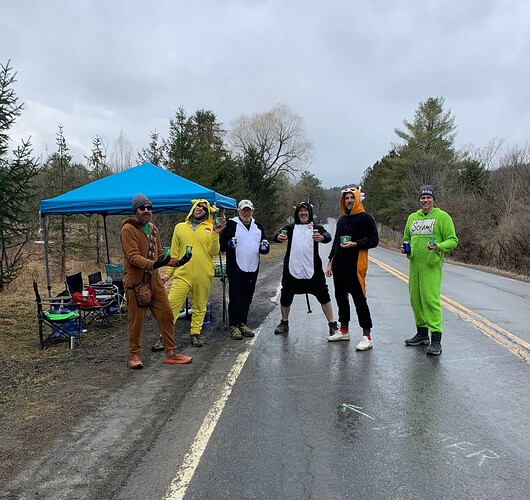 Beer was courtesy of the Ithaca Hash House Harriers. If you’re 21 or older, give us a look up. (Shameless plug!

More than twice that age! I just checked out the page. What a fun idea!