While we wait and see if Tri XIV will go on, I was digging through the archives and found this from 1990 (!!)

Adam can explain how he dogged me until in sight of the finish line… Reinhold somehow finished but who knows what course he ran? Hypothermia – see foto. 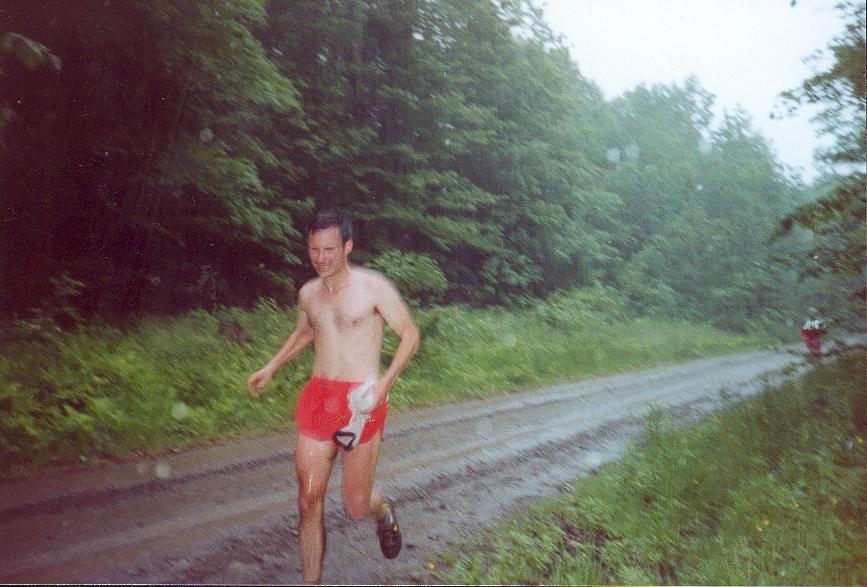 Oh man, that was some race. A bit of background first. I had graduated the year before and while I was still running with High Noon some, I wasn’t on campus every day and thus wasn’t really training. In fact, a week before the race, I’d biked from Poughkeepsie back to Ithaca with a friend, so most of my exercise was on the bike. But I was 22, so whatever. I don’t really know why John Saylor recruited me for that leg—maybe the team competition was different then, given that he and Aaron were already running it.

And more background. Aaron Pempel was probably a senior in high school, or at most a freshman in college then—he was a few years younger than I was, and I was pretty sure he was faster than I was. I’m not sure if this was the first trail race I ever ran, but it was probably close if not. I’d run a lot of cross country, but had never had to do trail navigation in a big way before. And since I’d been off biking, I’d never previewed the trail.

So the leg starts and Aaron goes out like a bat of hell. I was able to hold onto him for a while, but this is a real problem for me because my strategy was to follow him the entire way, assuming that he knew the trail. To this day, I don’t know if that was true, but at some point, it starts raining. I’m desperately trying to keep Aaron in sight, which is becoming harder and harder because I’m wearing glasses, and they have drops on the outside and fog on the inside. I’m tearing through the trails as fast as I can go, getting ripped up by briars and brambles the entire time since I can’t be careful.

Then, all of a sudden, I almost run into Aaron, who has essentially stopped. He hit the wall, and just started walking. Now I’m in the lead, and have almost no clue about where to go. Luckily, we’re fairly far along at this point, and I follow the obvious trail until it pops out on a road, where I see that there’s a checkpoint. I run down to the checkpoint and ask where I get back on the trail, and am told that I just have to continue up the road for another half-mile or so, and then the trail is clearly marked on my right. I do that… and can’t any hint of a trail. Just nothing. So I’m jogging around trying to find it when I look back down the road and see Truck coming toward me.

“Perfect,” I think, and settle in to wait for him. He catches me a bit later and I explain my predicament and tuck in behind him. We ran together for a while after that, since there was no way I’d have been able to find my way, but at some point, it becomes clear that it’s just a long downhill into the finish at the Tioga County Line, so I blast the downhill for the 30-second win. Might not have been the nicest thing to do, but I’m blaming it on being 22.

My legs looked like hamburger, and I could barely walk the next day. It wasn’t the farthest I’d ever raced at that point (the Ithaca Marathon half-marathon relay was), but it was close. Good times!

I’ve broken this off into a new topic. The question is if we can get Karen Ingall (@kag22) to share the story of her teammate who got lost and had to ask for direction at random houses while wearing a naughty schoolgirl costume. I only know it second- or third-hand…

Our entire team were dressed as school girls that year. It was team Mighty Isis strategy to win extra credit points from Team Atrocious. One of my team mates got lost, and found herself off trail near a house, so she knocked at the door.
A young man answered, along with his buddy. Both had apparently been relaxing in the home, wearing only t-shirts and boxers, while smoking a joint. One of them was in such a state of shock at finding a naughty school girl on his doorstep, that he could not
even speak.

Karen does not do the story full justice. You had to see the naughty schoolgirls in person to realize the impact this must have had on the guys who had been smoking a joint, sitting around, and then there is the schoolgirl complete with tartan short skirt (above white kneesocks!) and pigtails standing at your door! “Thank you Lord my prayers have been answered!” IIRC it was on White Church Rd. or maybe Old 76 Road – but I think the latter was a different race, Sh’Tara from Washington DC getting hopelessly lost and being taken in for breakfast by an older couple. Anyway we definitely gave the Naughty Schoolgirls full credit for their new twist on the Triennial.

The way I remember the story was that the runner stopped at the first house, where the door was answered by an overweight older guy wearing only shorts. When she asked if he knew where the Finger Lakes Trail could be accessed nearby, he said that he didn’t know but that his sons might. So she followed him in, only to find his two rather large sons, sitting on a couch playing videogames. But they didn’t know either, so she left (with a certain level of relief) and went to the next house. There the door was answered by a little old lady, and when the runner said “I’m running a race and I’m lost,” the little old lady looked her naughty schoolgirl outfit up and down slowly, and said, “Yes, my dear, you are.” Eventually she made it out to 96B and back to the Michigan Hollow exchange point.

But hey, I could be making all this up. As I’ll share in another story sometime, making things up is a long-standing Triennial tradition.

My favourite story is a cautionary tale for all you fast runners who don’t have any trail experience. That is not common now, most runners around Ithaca at least experiment with trails, but back in the day (1984), as I have reported: “On Leg 4 (Connecticut Hill), Larry Prud’homme, who could beat me by several minutes over 10k, decided he didn’t need to pre-run his section of trail, because he could just hang on my coat-tails until the finish was in sight (in modern terms, we would say he was dissing me big-time). Off we went up to Riemann’s Woods. Harold Schultz got in front of him, slowed down a little, they missed a blaze, and I was off like a shot, beating them by fifteen minutes (not to mention that they ran on the roads instead of the trail whenever possible…). It was a hot day and the leaves were still not really out… they suffered, they suffered…”

I just accelerated around a sharp bend in the trail, ducked behind one tree to let them blast by, waited till I could see them looking around in confusion, and then snuck off down the trail until out of their sight range, then I could take off and run hard.