A few locals raced yesterday at the USATF Niagara (our local USATF chapter) Open & Masters Championships meet, and although the conditions were windy and warm, people did pretty well.

In my first race in two years, I ran a 5:02 or so in the 1500m (no official results available for that race yet) for last place. It was an achievement just to finish since I’d had only two speed workouts beforehand, was terribly sick on Wednesday night (but recovered quickly), slept badly the night before, had trouble warming up effectively due to poor meet management, and was all alone in last after the first lap. I was hoping to run essentially 5:20 pace, which would have been a 5:00, and the fact that I missed slightly is easily chalked up to the strong headwind on the backstretch. Notice the dips after each quarter of the race in the Strava Race Analysis chart: 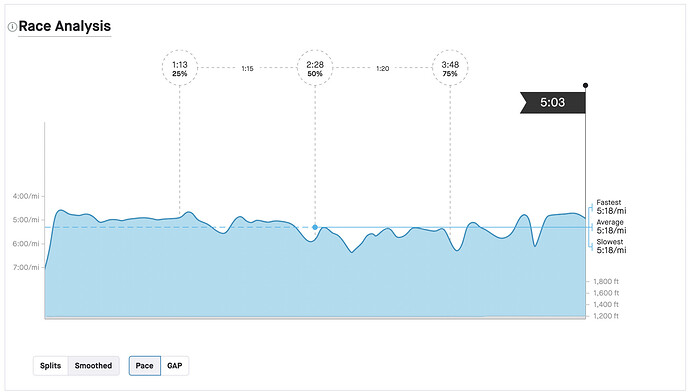 It’s worth noting that the quarters that Strava identifies don’t quite match up with the laps on the track due to the 1500m being 100m shorter than four full laps, but it’s interesting to see the wind reflected in pace so obviously. My actual splits were 76, 2:38 (82), 4:02 (84), and 5:02 (60 for 300m). Honestly, I felt kind of lousy after the first lap and it never got any better, but 5 minutes just isn’t that long to tough it out. My goal was to finish without hurting myself, and apart from some left glute pain afterward that’s continued to today, my calf strains and old heel pain were totally fine.

Some of these results are available at https://live.trackqua.com/meets/10425. I say “some” because several races aren’t currently included (men’s 1500m, women’s 800m, and the 3000m for both). And the results for the men’s 800m are wrong. I’ve reported all these problems and with luck, they’ll be fixed soon.

As I noted, the meet management was confusing. It started at 9 AM and was a rolling schedule, but there were so many events, most of which had only a couple of entrants, and they took so long between heats and events, that it was entirely unclear how long it would be before any given race, making it impossible to warm up. Adam Pacheck can say more, but I think he warmed up three times for his race, and I never dared run out of sight of the track in case things suddenly moved faster.

It made me extremely appreciative of all the FLRC track volunteers who ensure that our meets move smoothly and predictably.