I’ve seen a few posts on Strava, and @tonya said she saw @scottpdawson and @amy-dawson out on the course, along with @Mike_S (who sounded like he was hammering the full course). Let us know what you did for your virtual Skunk, whether it was day or some previous day!

Virtual Covid-19 is in the books,

First let me explain what Virtual Covid-19 is. Trails ROC put together this Virtual run to support the 3 running stores in Rochester. The total amount raised would be divided by these stores. The entry fee was $20.00 and Trails ROC would put in what ever was needed to round it up to an even thousand. Last time that I hear, the amount raised was $17,000.00

Now my run. I decided to do both Skunk Cabbage races courses. This was going to be interesting, because for the last 4 weeks my weekly average has been only 20 miles. I got up this morning and drove into Cornell. There were a few cars at the finish line when I got there. The start and finish lines had been freshly painted. I planed on running the 10K first and then the half marathon. But my mind had other ideals. A mile into my run I realized that I had started at the wrong starting line. I got thinking, that it would probably be easier to start the half after the 10K than the other way around. So that is what I did. I finished the 10K in a slow 1:05:21. Then got something to eat, changed water bottles and walked down to the half starting line. I ran the half in 2:22:43. This is actually faster than I usually do it in. Because it is usually the day after I had run Bull Run Run 50 mile. So not only did I run my weekly mileage in 1 day. I ran my longest solo run in over 30 years. Thank you John for being there to hand out Skunk Half Marathon medals and for marking the courses of the races, even though they had been cancelled. And thank you to the Banana for being out there with the cow bells, cheering the runner on, that ran today. 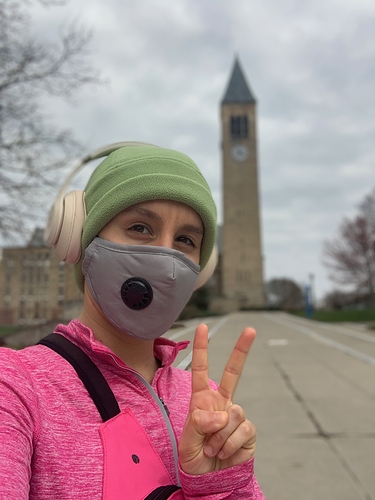 I don’t usually run with headphones but the best thing about races is people cheering—something I did not have today on the ghostly Cornell campus, so I thought some music would help. And as you can imagine, it is less than delightful to run with a mask, so I decided to ditch my watch and just run the course for fun.

Big shout out to everyone who run a virtual race too! Hope you managed to have a bit of fun despite the situation

Plotted my own 10k course. Was very pleased I got the distance spot on, staring and ending at my house! Took off with the intent of racing it. Unfortunate interruptions to my pace included 3 loose dogs, my neighbor who wanted to chat about his car repairs and the steepness of my mid-race hill. Let’s just say the topography in my neck of the woods is steeply rolling hills! As always I was hoping for a better race time but now that I have the route mapped I can try again another time. And all this hill running should have me in great shape for XC in the fall.

It was no surprise that the Skunk Cabbage Half Marathon was canceled shortly after the scope of the coronavirus pandemic became apparent. For me, this race is a harbinger of spring, when we all enjoy the camaraderie of racing as spring starts to emerge. So, we raced it anyway! https://scottpdawson.com/skunk-cabbage-half-marathon-2020

Great reports, everyone, and @shiggyrunner, I’m not surprised you doubled, something that would normally be impossible. It has to be tough, not being able to race twice every weekend like you normally do. And it’s great to hear that John and @AlexK marked the course for everyone!

@Benedetta_Carnaghi, love the photo—did you really run in the mask the entire way? I’d go mad doing that—whenever it’s under 10ºF I need something over my nose and mouth, and it drives me crazy (and fogs up my glasses).

@scottpdawson, lovely writeup and great photos, as always. It was also heartening to hear how many people went out of their way to make the day a little more special for others, even while intersecting only in place and not in time.

@julie19, it’s hilarious that you were sidetracked by your race by a neighbor wanting to chat about car repairs—not something that’s generally a problem. But I know what you mean about the hills out there in Groton. We did a pancake breakfast run from McLean to Groton last year around this time, and I was surprised at how nasty those hills were. We’ll get back to group pancake breakfast runs eventually, and then you can show off your hills to more people!

Just to clarify it was @Mr_Hector who marked the course!! Thank you, Joel!

@adamengst I mostly run with the mask. I sometimes slide it down to breathe when I don’t see anybody around and then put it back up when I see people coming my way. But yeah—it’s no fun!

Hi–I’m a first-time FLRC forum poster and I just ran my first serious 10K. I didn’t even get the chance to register for the Skunk Cabbage 10K, but I trained for it anyway.

Yesterday starting at noon, I completed a course on the waterfront trail (verified by Map My Run). I stayed right on my goal pace, despite road crossings, friendly dogs, and kids on scooters along the way. I’m excited about next year’s race. Congrats to everyone who got out there yesterday!

I ran the virtual half several weeks ago, but the run itself was not good. Yesterday, while out on a 20 mile run (which went much better), I saw a ton of skunk cabbages, along with geese, a snake, a hawk, and an osprey. 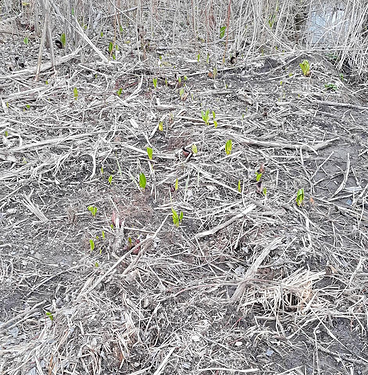 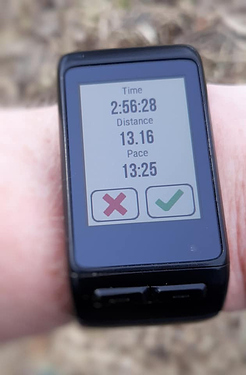 I ran my virtual skunk cabbage half on Saturday, April 4th 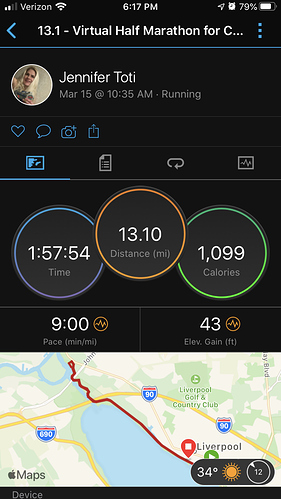 This is my first post. Hope I’m doing it right … Does anyone know when/where we can get our medals? I didn’t realize anyone was around yesterday at the location to give them out, or we would have driven up to pick them up. Thanks !

A bit of background: in the Cornell Chronicles video about her Olympic Trials marathon preparation, Bailey Drewes commented on how she valued the workout structure marathon training provided, marvelling at how hard it must be to work out every day with no specific goal in mind.

Well, I am much the same - so despite the massive changes in lifestyle that have occured since March 16th (as an IT person, i got sent home to work early), I clung to the half-marathon training program I was following. Because I was running at odd times of the day (or evening), and because other critical items such as sleep patterns and cross training were disrupted, I lowered both the intensity of the workouts (slower pace or fewer intervals) and my expectations for the race. Instead of breaking 2 hours, I just wanted to run the whole way without stopping. Modest, perhaps, but more than enough of a challenge for me this time.

Enough background. For those who use Strava, my race can be seen here:
https://www.strava.com/activities/3258283489/

But the short form:
PROS to the virtual race:

In the end, I did ran the entire way, but in a somewhat disappointing time. Sadly, I missed the skunk cabbages, but did dodge one turkey - and one runaway pheasant near the game farm. And I was thrilled to have company after crossing the finish - Yvette DeBoer had biked up to do her run, and Steve Jesch passed by at the halfway point of his virtual Skunk (started in Ellis Hollow).

Cool—ty Adam–Now to tell the world LOL. Completed my virtual Skunk Cabbage Half on Saturday. Was a very quiet one-boohoo-so had to break out my music. Never do music but couldnt be alone for 13.1 miles. Was a struggle but I just kept at it-2:40:33. Not my worse but by far not my best but I got it done!!! 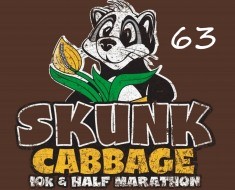 It took me two runs to Skunk It Up! I definitely don’t need a medal for that but, I’m still here, running more consistently at least. 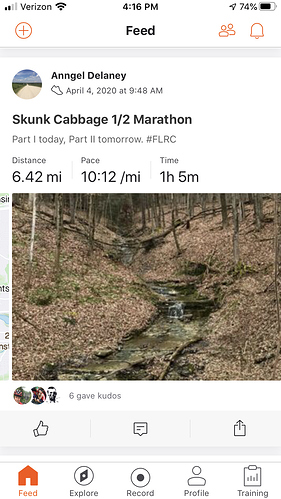 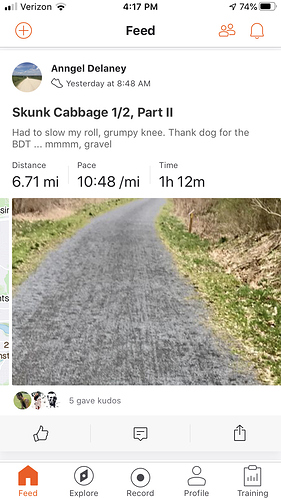 I went for the deluxe cross-country version of the Skunk Cabbage in the Saturday morning fog. Along with the mandated social distancing, I also practiced “pavement distancing” (as I do for all of my runs). All this right from my front door. That map for this one looks a bit willy-nilly. To all of you: Run Long and Prosper!!
http://www.movescount.com/moves/move333105269