What are your favorite running movies?

@steveshaum’s post about the ultrarunning flick coming out soon got me thinking about my favorite running movies. Here are a couple to start. This first one is obvious, but what other running movies would you recommend?

Chariots of Fire: Probably the most iconic running movie of all time. The only real problem, from my perspective, is that it’s largely about sprinters. 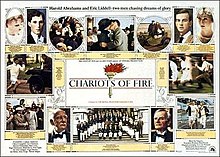 Chariots of Fire is a 1981 British historical drama film. It tells the fact-based story of two athletes in the 1924 Olympics: Eric Liddell, a devout Scottish Christian who runs for the glory of God, and Harold Abrahams, an English Jew who runs to overcome prejudice. The film was conceived and produced by David Puttnam, written by Colin Welland, and directed by Hugh Hudson. Ben Cross and Ian Charleson starred as Abrahams and Liddell, alongside Nigel Havers, Ian Holm, Lindsay Anderson, John Gie...

McFarland, USA: Fairly recent movie based on the true story of a 1987 mostly Latino cross country team in California. It’s a pretty good depiction of what cross country is like, although they apparently don’t have mud in California. The main anachronism is the coach getting fired for throwing a cleat that hits one of his football players. In the 1980s, that would never have been an issue. 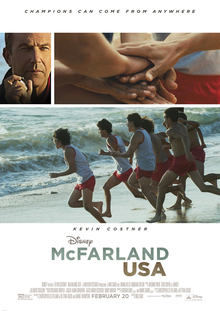 McFarland, USA (also known as McFarland) is a 2015 American sports drama film directed by Niki Caro, produced by Mark Ciardi and Gordon Gray, written by Christopher Cleveland, Bettina Gilois and Grant Thompson with music composed by Antônio Pinto. The film was co-produced by Walt Disney Pictures and Mayhem Pictures. Based on the true story of a 1987 cross country team from a mainly Latino high school in McFarland, California, the film stars Kevin Costner as Jim White, the school's coach, who lead...

Here are a couple I remember well:

Loneliness of a Long Distance Runner 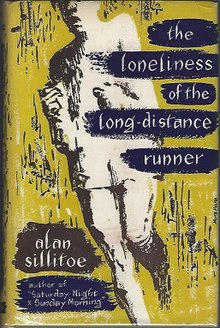 The Loneliness of the Long-Distance Runner

"The Loneliness of the Long-Distance Runner" is a short story by Alan Sillitoe, published in 1959 as part of a short story collection of the same name. The work focuses on Smith, a poor Nottingham teenager from a dismal home in a working class area, who has bleak prospects in life and few interests beyond petty crime. The boy turns to long-distance running as a method of both emotional and physical escape from his situation. The story was adapted for a 1962 film of the same title. When he is ... 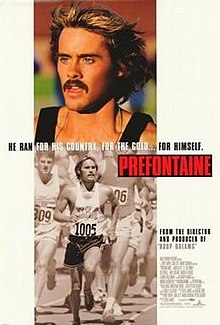 Prefontaine is a 1997 American biographical film chronicling the life of the American long-distance runner Steve Prefontaine and his death at age 24. Jared Leto plays the title character and R. Lee Ermey plays Bill Bowerman. The film was written by Steve James and Eugene Corr, and directed by James. Prefontaine tells the story from the point of view of Bill Dellinger, played by Ed O'Neill, the assistant coach who was with him day-to-day, and Nancy Alleman, the runner's girlfriend at the time of h...

The Barkley Marathons: The Race That Eats Its Young

and how about Forest Gump! - not really a running movie, but there’s a good portion of the film when he’s ruuuunnnnning! 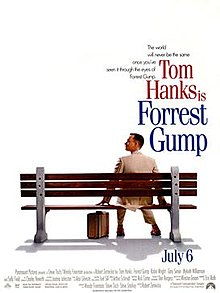 Forrest Gump is a 1994 American comedy-drama film directed by Robert Zemeckis and written by Eric Roth. It is based on the 1986 novel by Winston Groom, and stars Tom Hanks, Robin Wright, Gary Sinise, Mykelti Williamson, and Sally Field. The story depicts several decades in the life of Forrest Gump (Hanks), a slow-witted but kind-hearted man from Alabama who witnesses and unwittingly influences several defining historical events in the 20th century United States. The film differs substantially ...

Goshen is one of my favorites. It’s a documentary from 2015 about the Tarahumara—a race of natives in a remote region of Mexico who, for centuries, have embedded running into their culture. (The Tarahumara were also a major part of the book Born to Run.) The film seems to capture their lifestyle very well, and discusses their distance running lifestyle and how they largely avoid modern day diseases while eschewing western medicine.

Forest Gump totally counts. Without it we wouldn’t have all those clever idiots yelling “Run, Forest, run!” from their car windows while we’re on training runs.

@tonya and @meganthom and I saw Brittany Runs a Marathon a while back. It’s not a classic, I don’t think, but it does offer a more modern look at how someone who’s having some trouble with life might find running a source of control and growth. 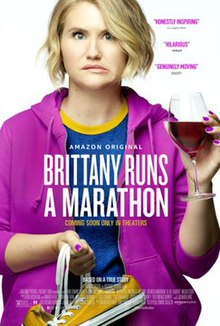 Brittany Runs a Marathon is a 2019 American comedy film written and directed by Paul Downs Colaizzo, in his directorial debut. It stars Jillian Bell, Michaela Watkins, Utkarsh Ambudkar, Lil Rel Howery, and Micah Stock. The film follows an overweight woman in New York City who sets out to lose weight and train for the city's annual marathon. It had its world premiere at the Sundance Film Festival on January 28, 2019 and was released on August 23, 2019, by Amazon Studios. Brittany Forgler is a 28...

A couple of my favorites:

(1) “Fire on the Track,” an excellent documentary about Steve Prefontaine’s life and career.

Fire on the Track: The Steve Prefontaine Story (Video 1995) - IMDb

Directed by Erich Lyttle. With Dana Carvey, Ken Kesey, Phil Knight, Brian Lanker. Pre" embodied the spirit of athletic excellence. He had a belief in self and sport that transcended all but the outer reaches of human speed and endurance. As a...

(2) If you are going to go with one of the Pre biopics, I much prefer “Without Limits” to “Prefontaine.” Give me Billy Crudup as Pre and Donald Sutherland as Bowerman any day of the week over Leto and Ermey. (Sorry, @KeiferD!) (3) In the ultra category, a couple of my favorites are:

“Unbreakable,” which documents the battle between Geoff Roes and Anton Krupicka almost a decade ago. In my opinion, that race kicked off the ultra boom in the United States. Directed by J.B. Benna. In 2010, four of the greatest undefeated mountain runners on earth toed the starting line at the Western States 100-mile endurance run, the oldest and most prestigious 100-mile foot race in the world. While their lives may be...

My favorite running film of all, though, may be this short film from Salomon about Bernd Heinrich. Heinrich’s “Why We Run: A Natural History” is a must read for runners.

I know a bunch of local runners know Yassine Diboun from his FLRC trail days. Here’s a new short film he did with his sponsor Columbia Montrail.

Strong agreement on Chariots of Fire as the most iconic running movie of all time. The original film footage of the races from 1924 that you can watch on youtube is remarkably similar to how it is depicted in the film: https://www.youtube.com/watch?v=ZvLl64HI_5M.

I would also go with Without Limits as the best Pre docudrama. It captures the races well, especially Pre’s frontrunning strategy.

@RichHeffron linked to Unbreakable above. It’s now on YouTube for free for a limited time.

I just watched it last night for the first time—great film that lives up to the hype in every way. You don’t have to be an ultrarunner to enjoy it.

I just watched this and couldn’t help but think, “really Killian, WHITE?!?!?!?” How did his kit stay clean the whole race? Took a big gamble there.