Sorry to be the bearer of bad news, @Challengers, but the park manager for Buttermilk State Park has confirmed that the trail by Treman Lake is closed for repair and will remain that way for at least a couple of weeks. Other critical infrastructure was destroyed in the recent storms and those repairs are taking precedence.

See many of you tonight at Upper Buttermilk at the FLRC picnic!

Good news, @Challengers! The word from the Buttermilk State Park manager is that the Tortoise & Hare course is open again. He writes:

Lake Treman loop back open (except stone arch bridge which was partially destroyed, trail reroutes via FLT spur to Yaple to Comfort Road).

The next time someone runs it and sees what the reroute looks like, could you post to let us know if it seems notably longer or shorter?

I haven’t been there since before the closure, but I know what he’s talking about. The Lake Treman loop goes al the way around the small lake and over the top of the upper park’s dam. The new, rerouted loop follows the T&H course on the orange spur trail and back down the service road off Comfort. (This is where the T&H takes a hard left to cross the closed bridge.) The new lake loop instead continues straight on the service road and then up a bunch of stairs, over the dam, and then back onto the Tortoise course. I think it adds about 0.3 miles to the course, and the stairs make the course significantly slower.

Chris and I ran it , there was a 2x8 at the end of the stone bridge, fell off water up to my chest. But warm, oh well.

I just ran the course and there’s a sawhorse and trail closed signage at the orange blaze junction. I think a true out and back is a fair substitute instead of looping around the lake. 2.7 mile the parking puts you just a bit down the gravel road leading to the sharp left for the bridge. So, am counting this effort: 5.4 mi Run Activity on September 7, 2021 by Scott D. on Strava

Thanks, everyone! I think @scottpdawson’s suggestion of an out-and-back turning at 2.7 miles makes the most sense. Hopefully they’ll get the bridge fixed sometime soon too.

The stone bridge is still out at the top of the Tortoise course but you can get across if you’re willing to get your feet wet. The water is a little high after last night’s rain so cross carefully.

I live at the top of the hill so I ran the course backwards this morning (Hare and Tortoise), starting and ending on either side of the washed out bridge. That keeps the course the original distance and saves the having ford the stream mid-run. However, it does mean doing the easy part first and the hard part last… I’d still recommend it over the reroute on the stairs. 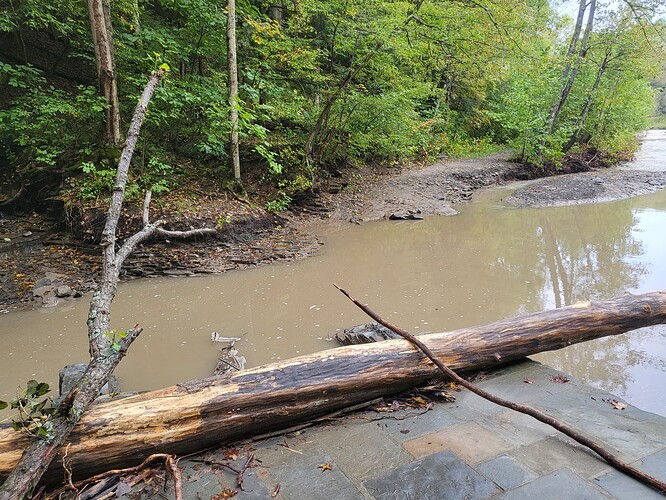 Stone bridge is still out as of this morning, but the water’s about a foot lower than Brian’s photo, maybe a ~12ft section at ~18in deep? Just your average creek crossing!

Good to know. I plan on running a circuits of this course on Thursday. You can avoid the water altogether by starting the run on one side of the bridge and running the full course to end on the opposite side, which I think is what Brian’s describing in his earlier post.

I’ll comment as well. I ran this course on Thursday twice and the second time around with Pete. Crossed here at the damaged bridge twice. The water level was quite a bit lower and I was submerged over my ankles, maybe low shins. I walked across each time to maintain good footing and it was manageable. So a standard creek crossing as Steve said!

I decided to scope out Tortoise and Hare this morning, and was unable to do the water crossing in the upper part of the trail (after Yaple Rd), so had to reroute down the other side. And then I went off trail for a bit because I wasn’t paying attention! So I ended up doing an extra .7 miles. I almost tried wading across the water, as it’s not too deep in some parts… but thought better of it, especially since there were barriers put up warning people not to go that way.

buttermilk828×1792 146 KB
Here you can see my route where I considered crossing at two points and then turned back. It was still a beautiful run though!
1 Like
Waterfront Trail more water than front
MWoods (Michelle) November 2, 2021, 8:11pm #13

Aw, I should’ve read this thread earlier and just done the out-and-back or maybe gone ahead and crossed! It was kind of chilly to get wet this morning though. I’ll have to try again soon!