The first week of the 2022 FLRC Challenge is in the books! We’re up to 85 participants on the leaderboard, with 38 people having recorded at least one run. Remember, the Challenge only runs through August 14th this year (hence the countdown in the title), so register soon and start recording your runs in the Webscorer app. Also, if you want one of this year’s super-cool “Cover the Ground” T-shirts, you must register by May 1st. 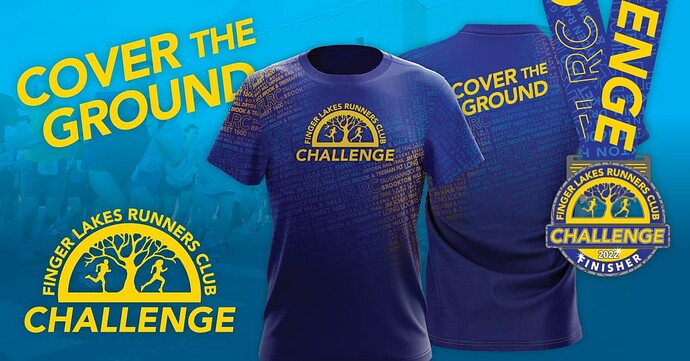 Rebecca Lambert is tearing up the series, leading off with a first-day run on the tough Lick Brook & Treman FLT course and finishing five other courses throughout the week. She has only four to go to complete the Challenge, and the way she’s running, she might be our first finisher, joining Jamie Loehr in that spot from 2021. 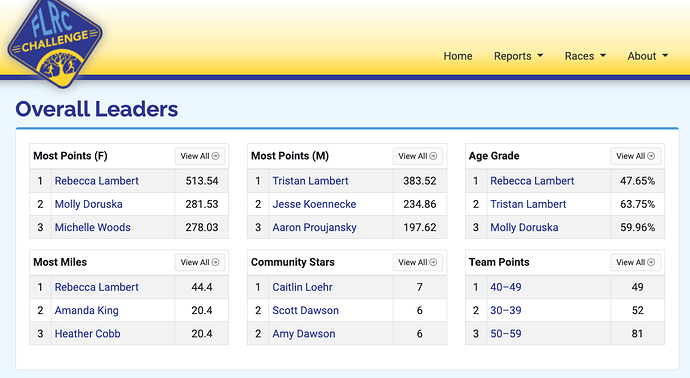 I’m almost surprised that no one has attempted the FLRC 100K Ultra Challenge yet, given how gung-ho people got last year. So this week’s wackiest run award goes to Patrick Milano, who decided to do his long run on a track (which one, Patrick?) and recorded nine Sweet 1600 efforts on 4/20. I don’t know Patrick well enough yet to make a weed joke out of it.

Our new Community Stars competition has had a great start, with Caitlin Loehr in the lead, thanks to a number of group runs and stories. She’s figured out that recruiting regular running friends gets you lots of group run stars, and it helps to have your spouse in the Challenge, too. That accounts for Scott Dawson and Amy Dawson in second and third place as well.

The big winner in courses is our Beebe Lake course, which adds the lovely trail around the lake to what is essentially last year’s Cornell Botanic Gardens course. Twenty-eight people have run that course already, helped by our first-day group run. Somewhat astonishingly, the only course that hasn’t seen any action yet is the Jim Schug Trail in Dryden. It’s a flat, scenic rail trail, and I highly encourage you to check it out. (In fact, a couple of us ran there on Wednesday, but we weren’t up to the full 8 miles and thus weren’t able to record any efforts.) 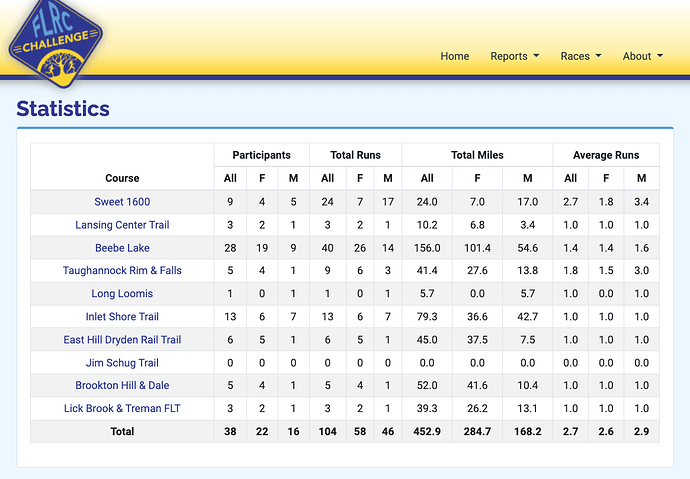 It’s too early for the team competition to mean anything yet, but thanks to Rebecca’s efforts and those of her husband, Tristan Lambert (shown below after their Lansing Center mudfest), the Fantastic 40s team has loped into the lead. I mention this mostly because the leaderboard has a new metric on the team member page (click a team name, then click Team Members at the top right of the page). The goal of the Score column is to show which people are contributing the most to the team: it’s the sum of 50 points for each unique course run, your average age grade, 1 point for every 50 runs, and 1 point for 26.2 miles run. The top ten members of the winning team all receive prizes—we also have a new Awards report that we’ll reveal once there’s enough data in the system for it to make sense. 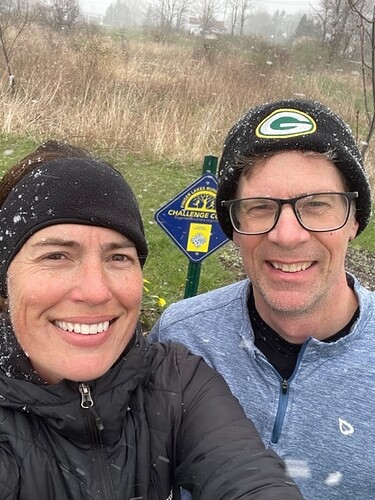 Finally, I know lots of people are off running Seneca 7 this Sunday, but if you’re not involved in that madness, come join a bunch of us for a group run on the Inlet Shore Trail at 8:30 AM, meeting behind GreenStar.

That’s it for this week. If you haven’t signed up for the Challenge, please do. And if you have, recruit your friends—the more people playing, the more fun it is!

I did the Jim Schug Trail today at 5pm with Jami!

And so you did, just after I finished writing the recap! Excellent—I’m glad we hit all ten courses in the first week.

I did my 4/20 effort at the Newfield track. It was a normal workout for me, but definitely wacky in the context of the challenge: 8 laps clockwise in lane 6 (this adds up to 1753.32 meters every 4 laps instead of 1600, and it was the first time I’ve ever not tried to run the shortest path in a running competition), then a bunch of 200s and 400s alternating between approximate mile race pace and easy jogging (another running competition first: intentional uneven pacing), and finally 8 more clockwise laps in lane 6 to cool down. No 420-related activities were involved, unless you count wishing that I was in 4:20 mile shape!