The rate of FLRC Challenge completion is increasing, and given that we’re slipping into winter weather, I’d encourage those of you who need just a few more courses to figure out your schedule. This week brought seven completions: Alexander Loane, Brittany Cronk, Kate Anderson, Peter Frazier, Amalia Skilton, Josh Brockner (hiking Forest Frolic after recovering from a broken foot on that course in September), and Vestal resident Kuwanna Dyer-Pietras, who gets bonus points for commuting to Ithaca to run with FLRC and complete the Challenge. Congratulations to you all, and thanks to Heather Cobb for organizing the Pseudo Skunk group run that helped a few people finish. 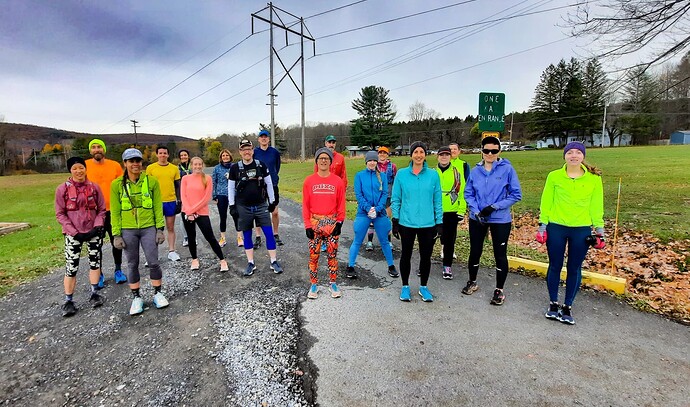 As I reported last week, Damian Clemons missed completing the FLRC 100K Ultra Challenge by one course—Pseudo Skunk Cabbage. His report on how it went is long, gripping read, and I won’t give away the straw that broke this ultra camel’s back.

Chief among our ultra camels, of course, is Pete Kresock, who continues to come up with ever more extreme challenges. This week he finished another one of his, which was to complete each Challenge course at least ten times. The mind boggles (and the feet cringe), especially since he finished it off running Forest Frolic in a combination of snow and running water.

Despite Pete’s efforts, he’s still in third place in the Most Miles competition with 947 miles, behind Bob Walters, who became the first person to break the 1000-mile mark, now with 1017, and Karen Ingall, who’s gamely holding onto second with 957 miles. (I’d just like to note that Bob’s 63 years old and Karen’s 51, and it’s great to see them running so well.)

While we’re on the topic of mileage, we as a group broke the 18,000-mile mark this week, with 10,000 miles for the men and 8000 for the women. What you wouldn’t expect from those numbers is that Thom B. remains a woman-dominated course, with women running 1037 miles to the men’s 739 miles. The group run last weekend put Pseudo Skunk Cabbage over 2000 miles, joining the Waterfront Trail and South Hill Rec Way in the 2000-mile club, while the Black Diamond Trail continues to lead with 3350 miles. Can we hit 20,000 miles total? It won’t be easy, but if we keep up our efforts in the remaining six weeks, it should be possible! 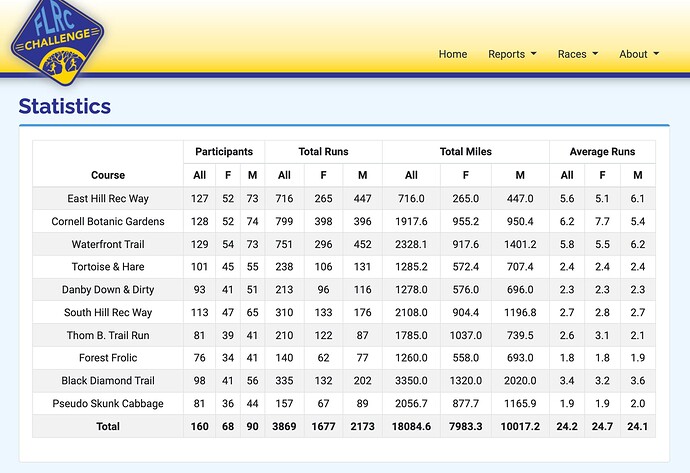 A big leaderboard welcome to our latest signup: Jim Hodges, who knocked off a quick Waterfront Trail to start the Challenge. He’ll have his work cut out for him if he’s planning to run all ten courses, since Frolic and Danby are particularly wet now, but it’s all still totally doable. And special thanks to Nichole Cappadora, who ran the East Hill Rec Way to record the only Challenge run on Monday the 15th and keep our collective streak alive. Let’s see if we can avoid missing a single day before the end of the year.

If you haven’t yet responded, I’d really appreciate it if you could complete the FLRC Challenge survey. Your answers will help us decide whether to put on the FLRC Challenge again next year and if so, how long it should be, which courses we should include, and what changes could make it more fun for even more runners. (Based on early responses, the Jim Schug Trail in Dryden will definitely be included. However, Cornell is very unlikely to let us use Monkey Run; I was told last year that the trail couldn’t withstand more traffic.)

Finally, I’ve heard from a number of people that they’ve enjoyed seeing the FLRC Challenge lawn signs around the area all year. Don’t be dismayed if they disappear soon! Tonya and I are planning to make a trip around the area sometime over the Thanksgiving break to pick them up and store them for next year. We’ll be in touch directly with those who are hosting them when we know what day we’ll be by.

Hope to see lots of you at the Turkey Trot on Thanksgiving morning!

ran the East Hill Rec Way to record the only Challenge run on Monday the 15th and keep our collective streak alive.

I’m just wondering how long the collective streak is. Is it from the day the first course opened?

I would’ve gone out Monday night to run the Waterfront 5k if necessary to keep up the streak, but I saw Nichole had already posted her run.

A post was merged into an existing topic: Run farther with the FLRC 100K Ultra Challenge!

I’m just wondering how long the collective streak is. Is it from the day the first course opened?

Yes, I haven’t done an exhaustive check against the Activity Log archive, but I believe at least one Challenge effort has been made every single day since we started.