We’ve completed the 2022 FLRC Challenge! Congratulations to the 111 people who finished the Challenge—we had 144 people run at least one course for a 77% completion rate, well above last year’s 53% completion rate.

Before I get to this year’s winners, I just want to say that we should have a round of virtual applause (click the heart button under this post!) for everyone who participated, and particularly for those for whom completing the ten courses required tremendous effort. We’re all in awe of the people who finished the FLRC 100K Ultra Challenge, but it’s equally as impressive when someone who has just started running or is coming back from a major injury or surgery works their way up to covering 13.1 miles of technical trail. I’ve heard story after story from people for whom completing the Challenge was truly a challenge that made a significant impact on their lives. That’s special.

Unlike last year, there were no last-minute leaderboard changes for individuals this year, with Nora McIver-Sheridan winning Most Points for women, Adam Pacheck scoring the Most Points for men again, Caitlin Loehr repeating as our Age Grade champion, and Liz Hartman taking home the Most Miles crown. In our new competition, Ruth Sproul was our Community Star, showing us what a running retirement is all about through numerous stories and photos of her runs, many of which were with a friend. 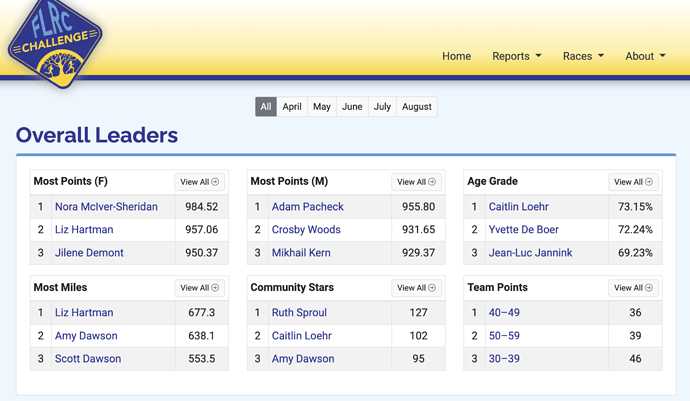 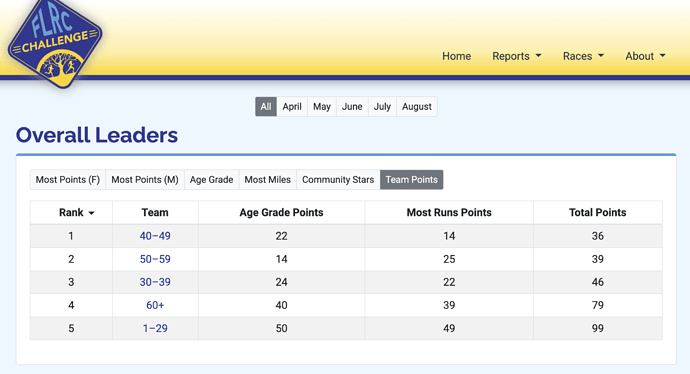 Remember that FLRC Challenge awards go much deeper, with 44 runners qualifying for nearly $1600 in prizes, which will be gift certificates at the Finger Lakes Running Company (give me a bit to put the list together so Ian can add the amounts to your accounts there). Check the Awards page to see the results. (And yes, there’s one error due to Liz Hartman and Margaret Frank tying for the fastest Sweet 1600 for women; Jilene Demont should be the 30-39 age group winner, not Margaret. Let me know if you see anything else off.) 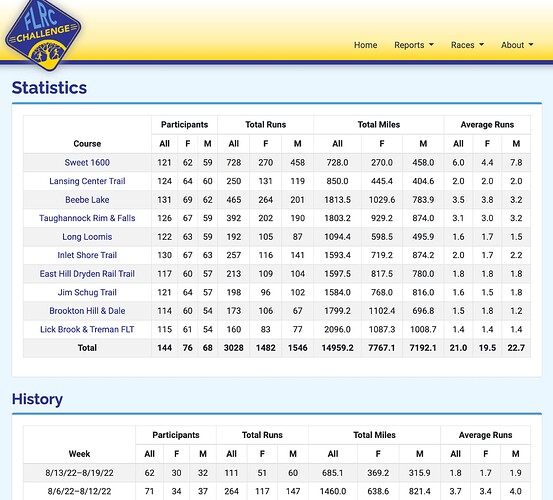 In a reversal from last year, more women ran than men, and women ran more miles than men. Men ran more efforts, but that was due to three guys who did significant track workouts that results in numerous Sweet 1600s.

Finally, I want to acknowledge our sign winners. Those who ran the most times on a particular course take home that course’s sign, and if there are turnaround signs, they go to the subsequent finishers. The people who owned our courses this year are:

There are many more tremendous achievements and great memories from this year’s Challenge, and I’ll hit some of the highlights at the award ceremony at the FLRC Annual Picnic on August 25th. Make sure to come to get your medal, signs, shirts, and general accolades! (Or, if you’re out of town, get a friend to pick things up for you.)

Thanks to everyone for participating, and we’re already starting to discuss new courses and leaderboard changes for next year’s FLRC Challenge, so if you have ideas for either, let me know sometime.

See you at the picnic!

@adamengst Thank you for an amazing challenge year 2! It was such a blast to feel part of this great running community, explore new trails, and challenge myself to some really hard efforts! I will be out of town during the picnic. Is there another way we can pick up our finisher medals, like last year? Thanks again!

Yup, we’ll definitely figure something out once they come in. I’ll probably bring them to the MITHACAL MILERS cross-country workouts that will be starting up on Tuesday nights soon, along with other FLRC events. Or people can swing by my house sometime. And eventually, I’ll put the rest down at the running store in the FLRC pickup box.

Amazing work everyone, you all inspire me! Count me in the club of people for whom this was truly a challenge. Every course starting with Long Loomis was my longest jog/hike ever. I never intended to get them all done, but I never hit a wall so just kept knocking them down (hooray for no time limits). After Brookton Hill & Dale, I decided to sign up for a 1/2 marathon in NH that will run past where I was born, my first job, my high school, and many other memory-filled spots along the way. I can’t believe that I finished this challenge, and that I’m looking for more! Thank you everyone