Ding ding ding ding! We did it, @Challengers! Adding up every run that has been logged into the leaderboard, we have finally broken the 20,000-mile mark! Each and everyone one of you contributed, and it’s an impressive achievement. 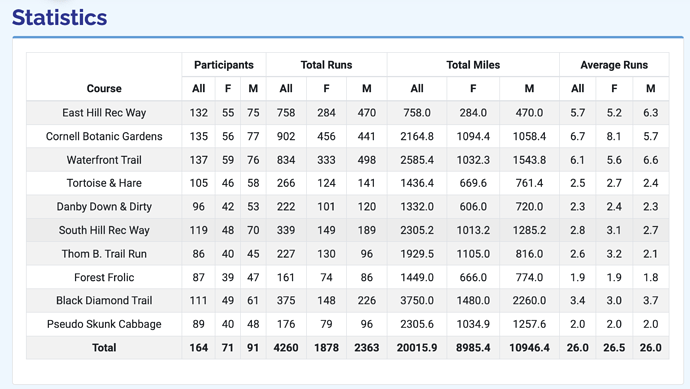 Some of this week’s miles came from Heather Cobb, who completed the FLRC 100K Ultra Challenge for the second time! Her first effort didn’t quite come under the 24-hour cutoff, so she went for it again and this time ran all ten courses in 20:04:05, with an elapsed time of 23:53:33 that snuck under the cutoff by just 6 minutes and 27 seconds. Astonishing running, and apparently, this is what you look like when you’re done. 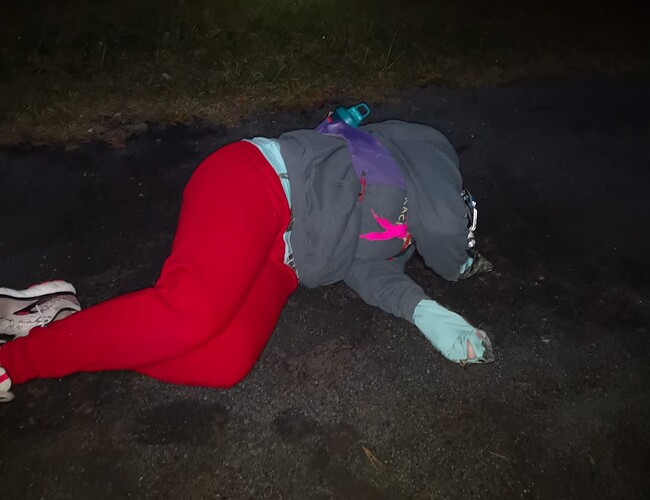 Another chunk of those final miles came from Mark Jauquet, who had been storing up Challenge efforts and finally found the time to enter them to qualify for his FLRC Challenge medal. Also completing the Challenge this week were Holly Folsom and Adam Engst, your humble Challenge director, who hiked the Pseudo Skunk Cabbage course together (with Karen Ingall and Mickie Sanders-Jauquet) when we couldn’t complete it at a run. Our final completion for the week came from Super Frosty Loomis and Monster Marathon race director Dave Kania. Kudos to all, and to all who are on the cusp of finishing, get those completions in!

Even more miles came from Karen Ingall, who burst into the lead in the nail-biting Most Miles competition. Bob Walters had led for most of the year, but when he left town to run the Honolulu Marathon—nice 4:22:12, Bob, which was good for 921st place out of 6232 finishers—Pete Kresock pulled into the lead, only to lose it to Karen a week later. Not many days left, folks, but I fully expect several more lead changes between now and the end of the year.

With Karen, Mickie, Mark, and me all in our 50s, the age-group-based team competition suddenly heated up. The @Thundering-30s had been solidly in the lead for months, but with all those efforts from 50-year-olds, the @Fabulous-50s came roaring back to tie the competition and then move into the lead on Jesse Koenecke’s East Hill Rec Way PR. Amanda King and Aaron King weren’t about to take this lying down, and their efforts today bumped the @Thundering-30s back into the lead before Mark Jauquet’s delayed entries reversed the order yet again. Exciting stuff, and it’ll be interesting to see what Heather Cobb’s group run tomorrow on the Thom B. course does to the standings.

The unseasonably lovely weather we’ve been having has been making it hard to stay inside, and it looks from the Activity Log like some runners have decided to try to run most of the Challenge in just the last few weeks. Let’s root for Karen Laface, Mik Kern, Francine Barchett, and Yinghua Wang, all of whom are kicking into the finish. Go, go, go!

Finally, as much as the FLRC Challenge is mostly about providing structure and motivation and community, we also have nearly $1800 in prizes to award at the end. Prizes will be gift certificates to the Finger Lakes Running Company store, though for any prize winners who have left Ithaca, we can do a check (let me know if that’s you).

Because we didn’t end up with two initially planned age groups (teens and 70+), I’ve extended the prizes in Most Points so the four people after the overall winners get a prize and in Most Miles so the nine people after the overall winner get a prize. Also, we had 193 runners, but for the purposes of the prizes, I’ve decided to assume we had 200 to make even numbers with our prize multipliers. This gives us three categories of prizes, and remember that it’s totally acceptable to win multiple prizes other than winning a course and winning the age group for a course.

Most of the prizes are unlikely to change in the remaining two weeks of the year, but hey, if you want to drop a fast run or log a few extra efforts to take over Most Runs on a course, go for it!

Until next week, keep challenging yourself!