Snow Run: Run while it’s snowing and see if you can capture a photo of the snowflakes to share.

Snow runs are so much fun!

I love how relaxing and muffled the world around us becomes when it starts snowing.

This was my street (North Cayuga) when I went out this morning: 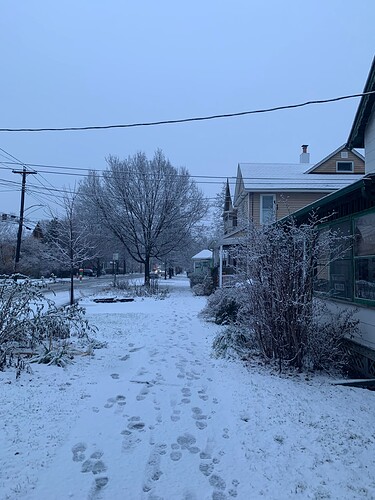 I ran to the Ithaca Falls: 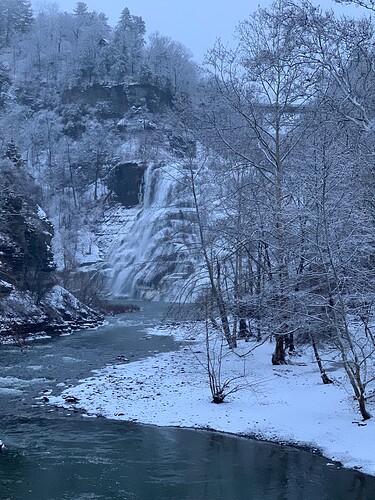 Then to the high school: 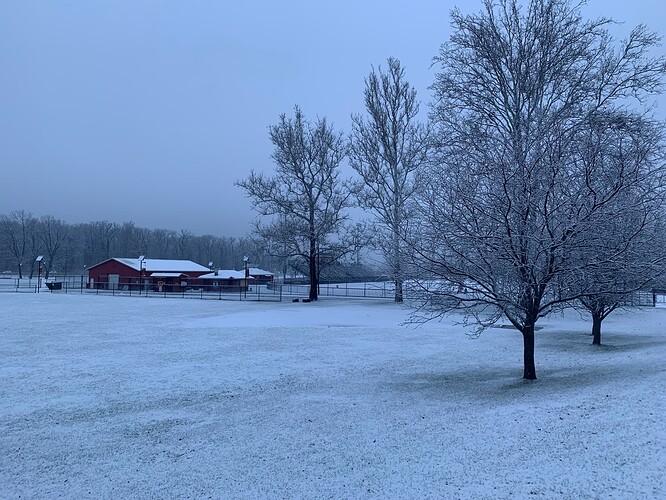 And then to Stewart Park: 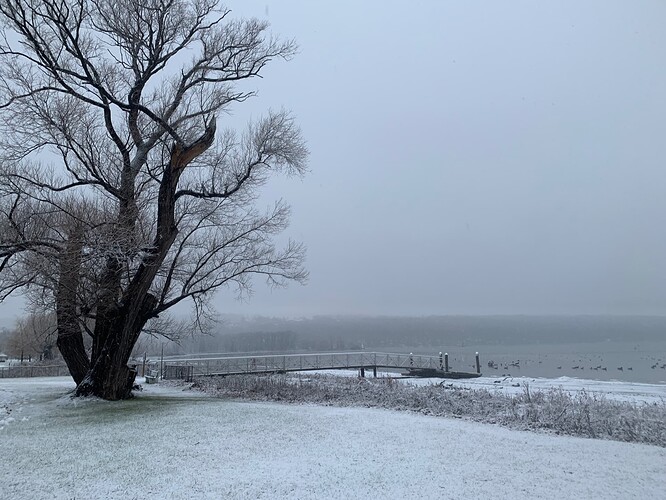 There were a lot of birds in the water that, after a few minutes, just rose and flew away. Magical! 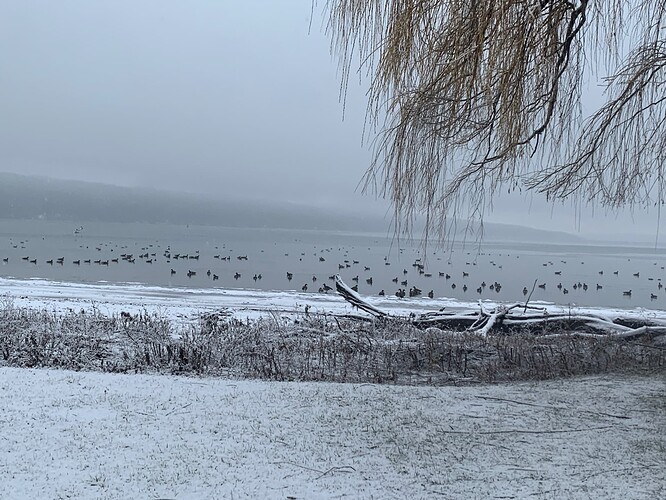 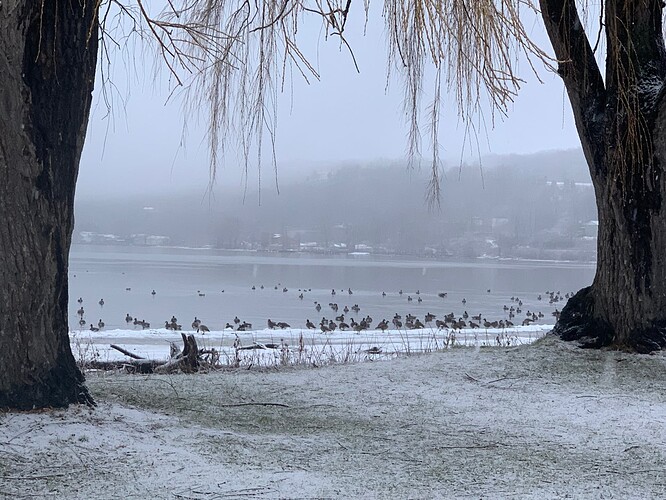 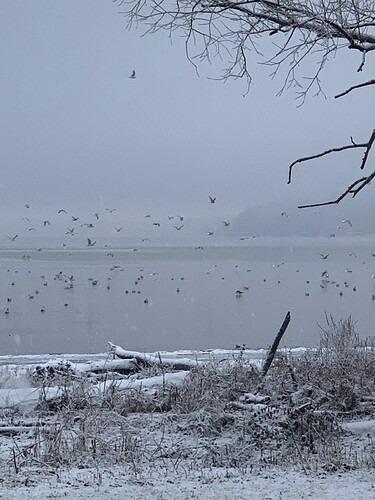 At that point, it also started snowing more. Here are the snowflakes on my hat: 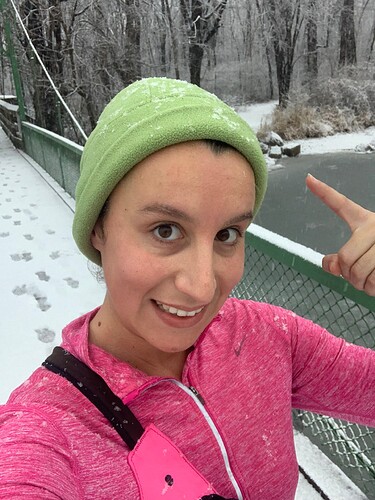 By the time I got home, the road was covered again by a perfect coat of snow! 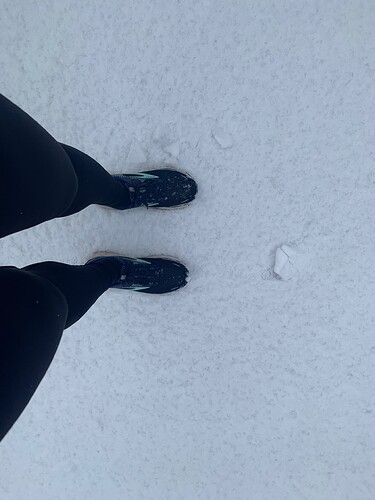 @Benedetta_Carnaghi I love the muffled and sleeping sound of snowy runs too. It’s as if the whole world falls silent for awhile.

Sadly (or perhaps fortunately? Depends on your perspective) Albuquerque did not get any white stuff this week. However, today’s run started and finished at my workplace, home to two troublemaker clinic cats - one of whom adores playing in shredded paper snow! 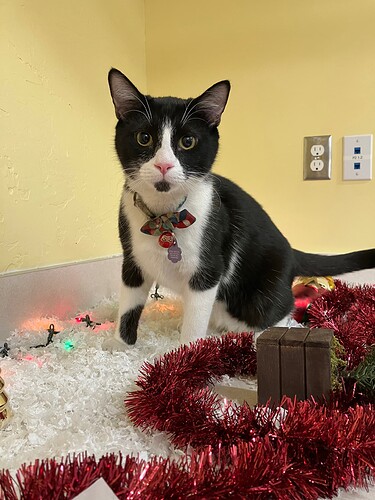 Severus in his festive sweater 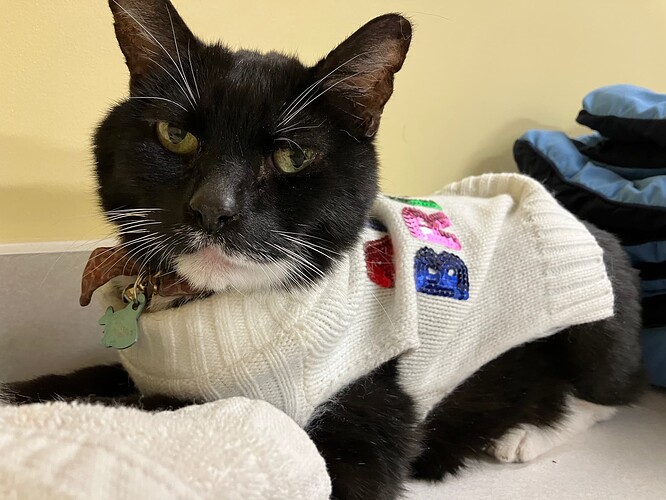 Last Sunday, the snow started to fall in bigger snowflakes toward the end of my run, and you can actually see them coming down in the first two photos. I love the feeling of being in a snowglobe. 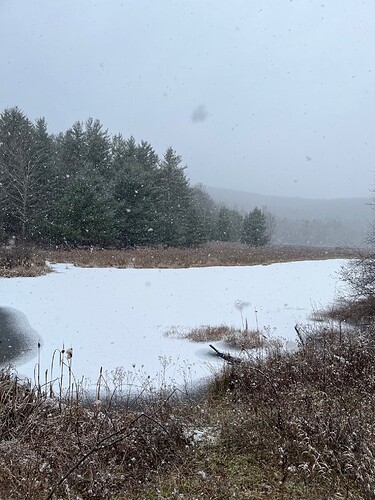 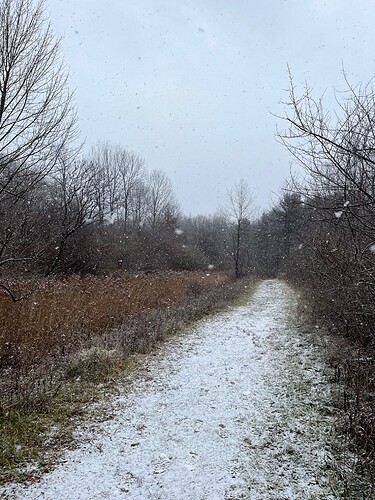 This morning I was inside during the heaviest snowfall, celebrating my daughter’s birthday. But later we were outside, as my husband snowblowed, the girls sledded, and I ran laps back and forth in my snowshoes at the edge of the woods to start practicing for Super Frosty Loomis! It’s only my second time ever wearing them and I am now ready to take them for a spin at the BUNP. 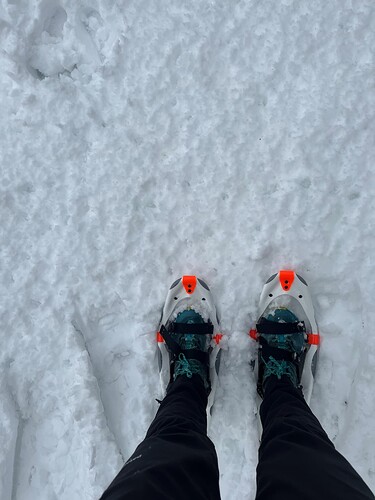 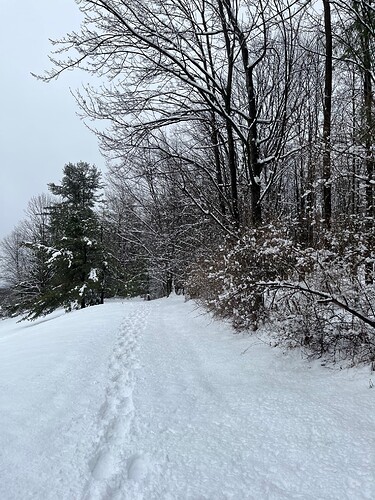 I ran in the snow this morning on the Dryden rail trail off Elm Street. It went from fluffy snow to rain by the end. If it lasts the rain there’s a nice snowshoe track for anyone who needs it and my husband broke a cross country ski trail! 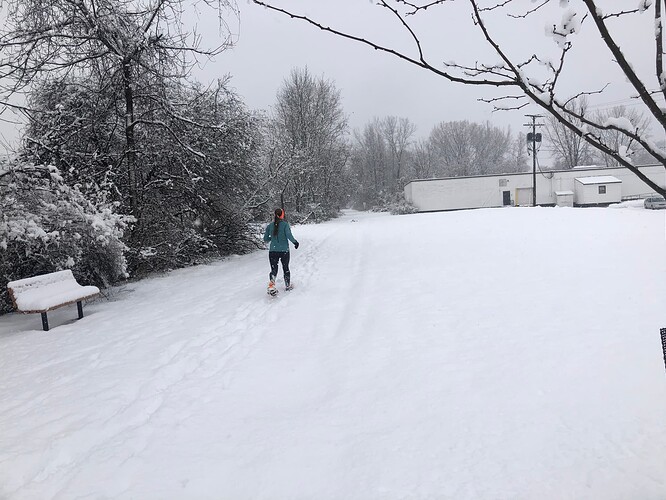 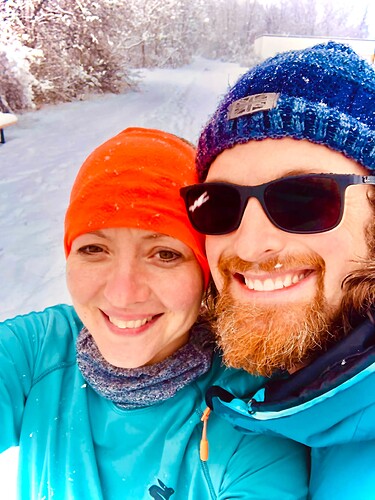 I think I got more rain and slush than snow and snowflakes this afternoon, but I’m claiming it as a snow run! Went up and around my local (Bean) hill, and absolutely zero view of the lake today! 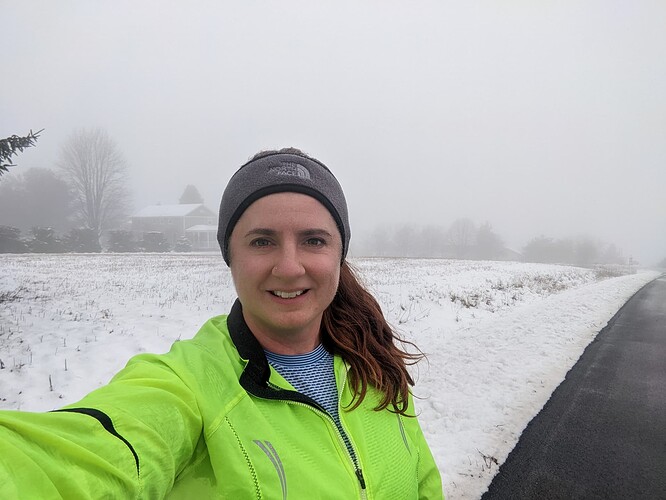 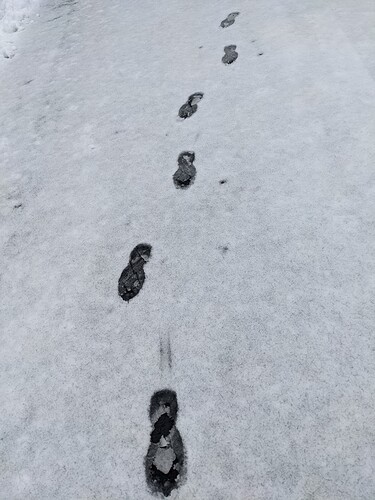 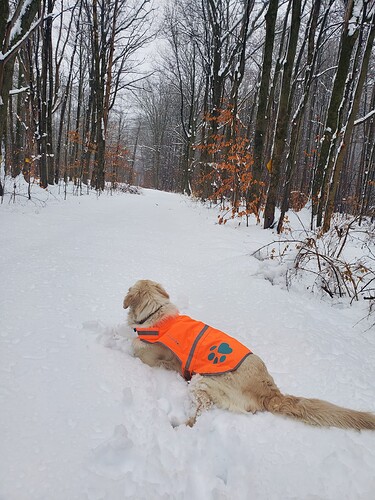 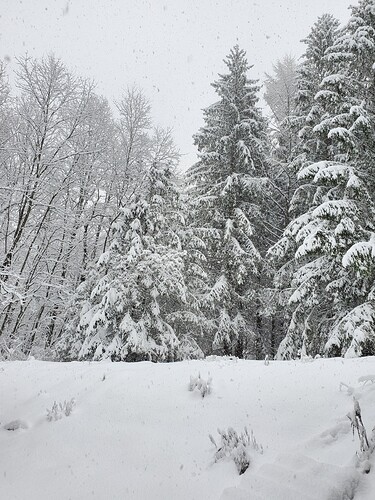 Ran with some friends this morning after the storm and we had to stick to the roads to avoid the black ice on the sidewalks. Not exactly a “snow” run, more of a post-snow run! 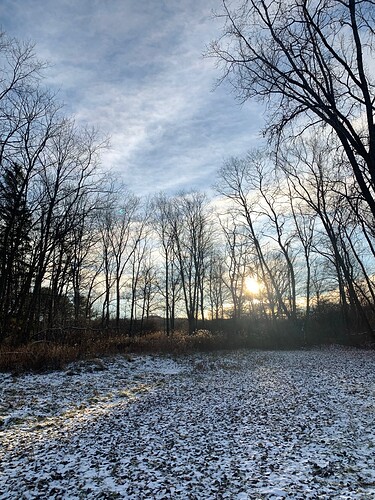 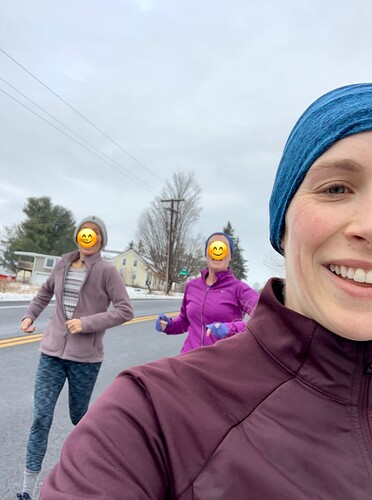 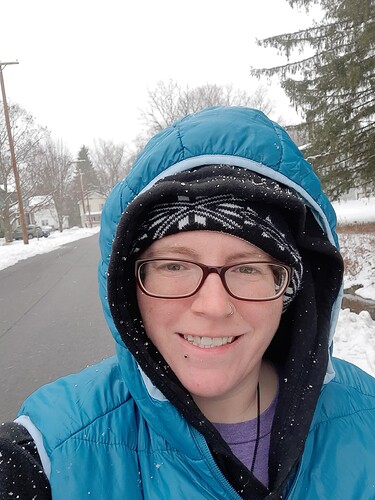 Saw out my window it was snowing so I rushed out in my PJs to get my daily mile in.

That’s what I call commitment!

Driving off to Christmas errands this afternoon, I saw a few snowflakes graze my windshield in my Southside neighborhood. Oh no! It surely wasn’t going to snow twice today. How would I manage to check off my Snow Run?

A few hours later, I returned home and began methodically checking the weather every 30 minutes. Dark Sky started telling me it was snowing; my window told me it was not. But which to believe, my own lying eyes or the weather service? Steve Jobs’ ghost continued to insist there would be light snow for the next 30 minutes. I knew I wouldn’t be running my whole workout outside - icy sidewalks and 400’s aren’t a good combination - but I wearily suited up in two light layers, thinking I could grab a bingo or two if I did my warmup mile outside.

I ran out my front door and immediately encountered two icy sidewalk patches. But after 18 months in Ithaca, I nimbly stepped around them and continued on my way. After three blocks, the first waifish snowflakes began drifting down. After four, I happened on this dapper fellow: 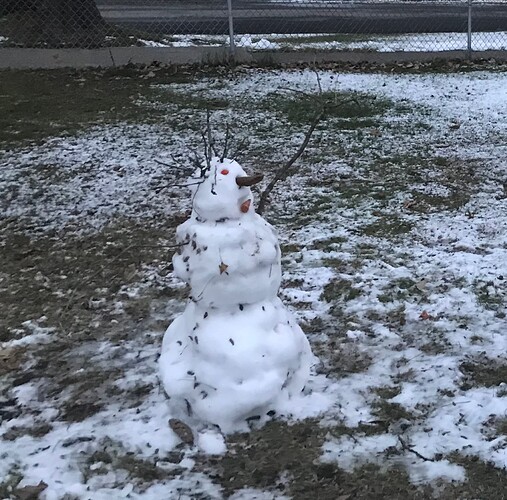 and as if the snowman had conjured it on, the snowfall intensified. Within a minute or so of my turnaround point, the snow was enough to be visible when I snapped a photo: 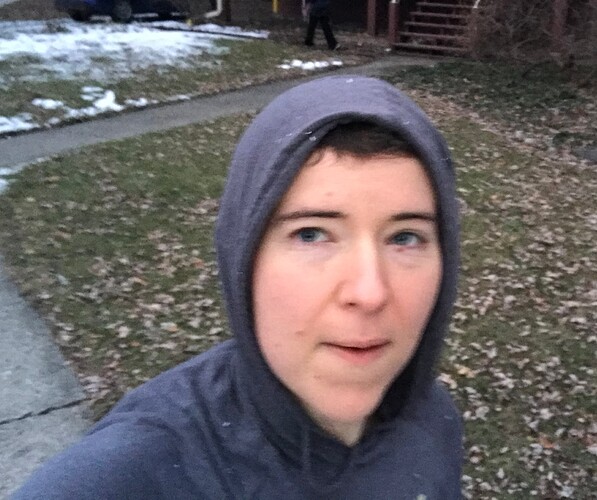 And with that, I am one off from bingo: 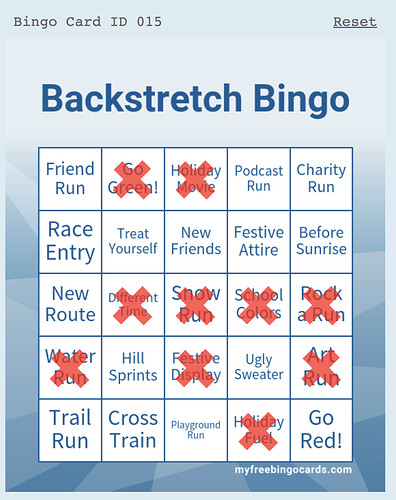 Good day for a snow run downtown to the west end Greenstar. 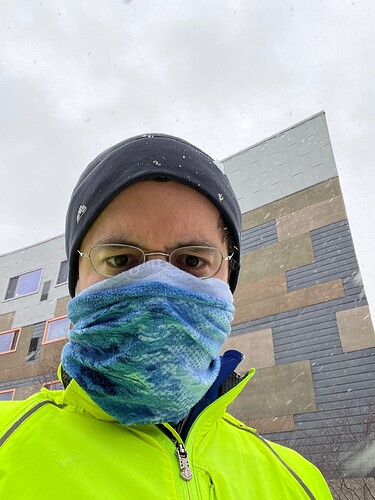