And the 2022 FLRC Challenge has its first finisher: Rebecca Lambert! She took the Challenge courses by storm, running the Lick Brook & Treman FLT course in nasty weather on the very first day. With one day off and a double on her final day, she then completed all ten courses in ten days, finishing with Taughannock Rim & Falls with her son Ben. 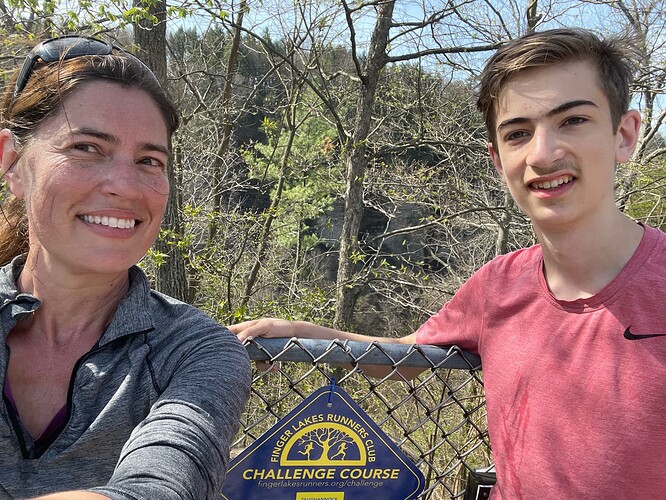 Those efforts also put Rebecca in the lead for Most Points for women, Average Age Grade, and Most Miles. Next up may be Heather Cobb with eight completions and Melissa Wallace with six. 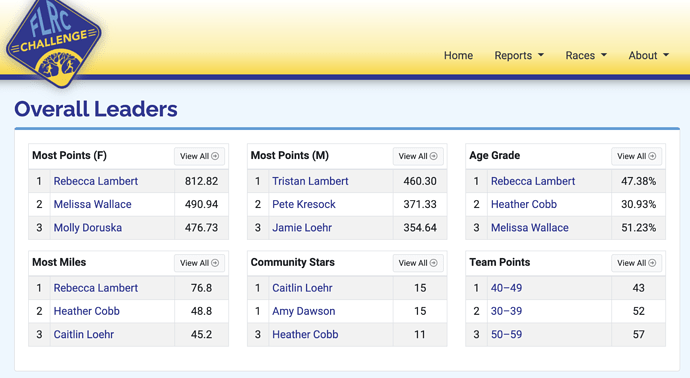 This week has been huge mileage-wise, with 640 miles so far. That bumps us over 1,100 total miles, suggesting that if we could average 555 miles per week, we could break a cumulative 10,000 miles for the group. Last year, we ran 21,724 over 42 weeks, an average of 517 miles, so it’s not impossible, particularly since we won’t be contending with the weather as much. 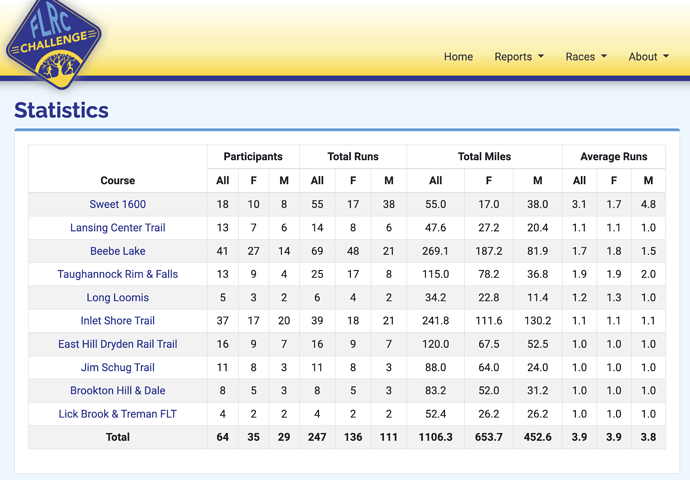 Although no one has yet attempted the FLRC 100K Ultra Challenge, rumors are swirling about who might tackle it first. I won’t pressure anyone by naming names, but keep an eye on the Activity Log, and if you see someone running multiple courses in one day, an attempt may be underway.

Some of this week’s miles came from the recruiting efforts of Caitlin Loehr, who has been logging a bunch of efforts on the Beebe Lake course with friends Michelle Woods, Amanda King, Mary Howard, and Susan Barnett. Kudos to Amy Dawson as well for encouraging her Trumansburg-area running friends like Teressa Naylor to join now that they have a home course in Taughannock Rim & Falls. Welcome, one and all, and if you have a running friend who isn’t yet in the Challenge, bring them in! (And remember the signup deadline if you want an FLRC Challenge “Cover the Ground” T-shirt is by the end of the day on Sunday, May 1st.) We’re at 112 participants now—can we exceed last year’s 193?

Don’t forget, this Sunday’s group run is at the Taughannock Rim & Falls course, and Scott Dawson and Amy Dawson are hosting a post-run hangout on their back deck. Once we’re all back to the Overlook, we’ll head over to their house.

The new “community stars” posts that have been helping us all put faces with names have been great, and I’ve been amazed to hear about all the wildlife you’ve been reporting. Jamie Loehr even got a picture of a bald eagle on the Jim Schug Trail, and Heather Cobb saw a beaver there too.

Finally, Pete Kresock gets the Broadway show award of the week for coming up with the lyrics for a run report inspired by Lin-Manuel Miranda of Hamilton fame. Personally, I can’t do basic math while running, much less compose verse. The question is, will anyone perform this for us live at the award ceremony?

Until next week, keep meeting your challenges!